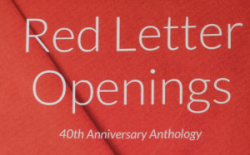 This is special all right; 40 years and still going with a wide range of styles. You can tell it has been put together by clever Open University students because it can be roughly split using the principle of thirds. One third is made up of poems about being an OU student and discovering poetry, one third about the experience of being a member of the Open University Poetry Society, and the final third saying “sod your theme My personal journey: poetry and the Open University. I’ll just write what I want”.

The society started off quite simply with an advert from Shirley Bell in the Open University’s magazine Sesame, back in 1981, with a suggestion of forming a poetry group. I was one of the first members and was glad to be with a supportive group that took poetry seriously. Anyone in the society can have a go at being an editor, putting it together and (now) posting it to the OU office who copy and send out the magazine. The OU Poets meet a couple of times each year, either at the agm (with a guest reader), a tutored poetry weekend, by monthly Zooming sessions, or via the five or six magazines a year.

This anthology celebrates its 40th anniversary with an introduction and end piece from the current chair Polly Stretton, memories from long-serving members Ted Griffin, Phil Craddock and Jim Lindop, and 52 poems from members who were tasked to submit one poem each for the anthology.

It’s not that surprising that people who studied Romantic or Twentieth Century poetry should want to write their own. Barbara Cumbers reminds us that geology has many “stories it can tell you”, and poetry can help layer those stories. Denis Ahern writes about his struggle with the strictures of poetry before discovering it’s not “an orderly arboretum” but offers the freedom of a “rain forest, tropical jungle, olive grove, furze covered heath".  Tim Field writes of the dreaded essay or Tutor Mark Assessment:

with poems and prose

it’s such a hard thing to do

even if only marked a pass 2

I don’t suppose I’m the only ex-OU student who still wakes sweating up in the middle of the night thinking they have an T.M.A. to complete or exam the next day. Adrian Green also talks of “so many nights / sacrificed / to the curse / of an empty page” but also of summer school where “the memory that abides, is discussing Prufrock / in the late night summer bar”. Olivia Dawson has fallen on love with Eliot with and is “itching / to write a poem of my own”. Kate Young remembers “Summer school York, 1985”, and Sue Spiers recalls Brighton where she “fell in love with the precision of poetry” and later joined the society and “was, welcomed, kissed, taken as one of their own”.

For Liz Power, 'My Road to an Ode' meant

out not to be the last.

Nigel Pearce talks of “an enchanted odyssey” with the OU, Liz Beber of the joy of discovering “Larkin, Frost and Pound”, while Susan Jarvis Bryant discovers “Byron, Wordsworth, Shelley, Keats”.

Judi Moore says the main benefit of a poetry society is to be with other poets who exist like unicorns only “reading, writing, shining”. But there are only a few chances to meet in person, for example, at the agm. Phil Craddock writes of one where “dust specks danced to the rhythm of James [Berry]’s phrases” and the “extraordinary” achievement of studying for a degree. Jenny Hamlett writes of a poetry weekend at Chesterfield “with exercise after exercise” and asking: “Is it possible to drown / under waterfall of poems?” Jim Lindop is still a member after 40 years and even though he has lost the game “with the forces of time and gravity” can rejoice in the music of all those “A4 sheets of ragged poetry.” Lem Ibbotson:

poetry has helped me to know myself

And to show who I am, for good or ill

I hope that my verses have pleased many

And that the rest do not bear me too much ill will.

But others regard the journey as a jumping-off point. There are poems that reminisce about ‘Levis and 70’s wild hair’ (Dave Sinclair). Shirley Bell remembers “The infamous TAD 292”, art and the environment course, which inspired many to write. Alice Harrison gives a useful potted history of the minefield of poetry. Julie Stamp has a wonderful love poem ‘Purple’, and there is also Paul Williams’ vivid and disturbing ‘This day of birth I remember’. Michael Lyons humorously talks of ‘The Falklands War, the Miners Strike, Moving to the Isle of Wight’ and eventually to the pandemic where “we’re all in it together”.

EF Griffin uses the metaphor of meeting a pig to talk about how hard it is to form relationships during lockdown, Mark Bones wants to be spared “from another year / of regimented scrawl”, and Sally Charnock writes about the changes that have bought us to the dishonest present.

and here I am, still with scores

of notebooks to be filled,

words to be distilled

'I will miss you, armadillos and ... tarantulas crossing the road in the dark' ►