When Little Amal met Louise the poet in Wigan ... 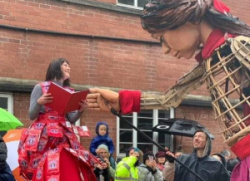 Little Amal – the not so little puppet of a nine-year-old Syrian girl who has been walking 5,000 miles from Turkey to the UK to raise awareness of the difficulties faced by child refugees - was greeted by poet Lemn Sissay when she arrived in Manchester on Wednesday at the end of a journey that crossed the borders of eight countries.

Before arriving in Manchester she was welcomed by poet Louise Fazackerley in Wigan, who got togged up in an appropriate get-up to meet the giant puppet on more or less equal terms.

Louise said: “Lots of people though I was on stilts but we built part of the skirt around some stepladders! The dress was made from recycled, roll-end packaging from Wigan’s iconic family business - Uncle Joe’s Mint Balls.  I worked with an emerging neurodiverse artist, Lee Wildcarde to create the carnival dress.  We were thinking about May Queens and carnival and upcycling.  I was sort of embodying the spirit of a warm Wigan welcome, despite the rain.”

Louise had been commissioned by Manchester International Festival and Wigan council to welcome Amal with a poem, “a great honour”.

Her narrative poem is called ‘How Amal Got So Tall’, and tells of her journey, and of being separated from her mother, and how ‘Amal’ means ‘Hope’ in Arabic. “It was important to me try and balance the needs of the children watching the parade with the thoughts of the adult audience - so storytelling seemed the best form.”

Little Amal has travelled from Turkey to Greece, then on to Italy, France, Switzerland, Germany, Belgium and finally the UK, ending her journey in Manchester.

The giant puppet has been made by the Handspring Puppet Company, the same people who worked on the horse puppet for the theatre production of War Horse. Called, it takes a total of four puppeteers to animate Little Amal: one for each arm, one for her back, and one actor inside her body, walking on stilts and also operating a contraption called "the harp," a complex system of strings that control the puppet's facial expressions.

The Handspring Puppet Company's founders, Basil Jones and Adrian Kohler, came out of retirement to create it. "The refugee story is the big issue of our time," said Kohler. The project is called ‘The Walk’, and its slogan is: "Don't forget about us.”

"It's precisely because the world is now looking at other issues that it's so important to bring the refugee crisis back into focus," said Amir Nizar Zuabi, The Walk's artistic director. He added that the aim is to highlight "the potential of refugees", rather than just their "dire circumstances."

You can help contribute to The Walk’s Amal Fund here

Write Out Loud has tried in vain to find out who took this picture of Louise and Amal, which has been shared on social media. We wanted to ask permission, and to give a credit. We just felt we had to share it as well, and hope that whoever took it doesn’t mind too much – or gets in touch!

Outbreak of 'cancel culture' on the Write Out Loud Gig Guide? ►

Well done Louise. Good to catch up with the back story. Thanks Greg. Wigan pulls it off again.