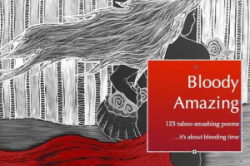 This is a comprehensive, really ‘amazing’ anthology of poems about periods, examining in depth all aspects of menstruation and its effect on the female body and mind. It is a woman’s world from which men are excluded – and indeed there are no poems by men in the anthology – because they do not bleed. If they had periods, as Jen Hawkins remarks, “we’d celebrate menarche/a triumphant rite of passage” and not as a curse.

All the stages of womanhood are explored in these compelling poems, that start in girlhood and continue while women are fertile - the pleasure of sex, having no periods or heavy periods, eating disorders, pre-menopause and post-menopause phases, and the state that is labelled with the derogatory term ‘crone’. Diversity of form, tone and content is an important quality of this collection that seems to focus on one topic but never stops surprising the reader. Despite feelings of fear, shame, anxiety and guilt that are linked to ‘the curse’, sisterhood and creativity seem to prevail and express ‘new beginnings’.

There are many good and inspiring poems in this anthology that contain striking imagery, memorable verses and insightful thoughts. “It’s about bleeding time,” as Gill Lambert and Rebecca Bilkau remark in the preface to an anthology that goes beyond the essence of being a woman in a society in which bleeding is a taboo, ‘Eve’s punishment’, a curse and a blessing, and a secret as well as the sign of womanhood. It is a paradox; it causes pain and discomfort but also relief and momentousness:

I bleed and from my body

uniting me with all that’s

fruitful in the earth.

to them in the Moluccas

Red is the colour that highlights the stigma and the trauma, and inevitably it is connected to sexual desire and to sinful acts. Red contrasts with white, the white of the bed sheets and knickers stained by the menstrual blood that appears unexpectedly during the day when you are at school or at work or during the night. You feel the blood trickling between your thighs and have to rush to the toilet, fearful that ‘men might see it’; it is a blot that is like ‘a stain on her soul’. ‘Tamponare’ (to dab but also to crash into) the flux is essential, as Alex Josephy humorously expresses in ‘Rischio di Tamponamento’:

A traffic warning. Risk of pile-ups. Every time,

it tickles me. I imagine giant tampons,

over Florence or Rome.

Loneliness and loss are part of the experience, which might also involve weight gain or weight loss, forgetfulness, and eating disorders. Each menstrual cycle signals a transformation that confirms that everything in life changes, turns on its head and miraculously moves. It can be traumatic, even terrifying, but it brings something new that allows different perspectives – “rivers of transformation”.

The goddess bled into the earth

Menopause and its effects are investigated from multiple sides. It can be a liberation from the ‘red dragon’, the ‘beast inside’, but it also results in a lack of ovulation and fertility:

Now we sleep in separate beds […] Take me back in, I cry, as the months get longer, and the cactus on the shelf yearns to bloom. We never talk about those things. I grab the thorns to get into my skin, to feel the noise of blood.

The “womb is empty. A cavern/where blood no longer flows” and hot flushes can be a nuisance, but menopause is also a time to rejoice; Tonnie Richmond suggests that women should not “regret the losses, [but] celebrate the gains/and worry not – sexual desire remains!” (‘Sonnet For Women of a Certain Age’).

The anthology is also enriched by reproductions of pictures by Paula Dunn and Kate Noakes. The artworks are abstract; Noakes’ pictures allude to women’s bodies and Dunn’s to bleeding. In the latter, scarlet, black and white are the prevalent colours and freely interweave on the surfaces, referring to ‘the curse’ in the symbolic opposition between red and white and in the allusion to something dark via the use of black. This anthology presents diverse and enthralling poems that engage the reader in a discovery and rediscovery of the blessings, secrets, pains and taboos of menstruation; it is both a stigma and a metamorphosis that opens up new possibilities.

◄ 'I will miss you, armadillos and ... tarantulas crossing the road in the dark'

When Little Amal met Louise the poet in Wigan ... ►