Ashby-de-la-Zouch in Leicestershire seemed a fitting place to begin Simon Armitage’s 10-year – sorry, make that nine-year – lockdown-affected tour of the selected libraries of the nation, big and small.  “The Apha and the Omega of the tour,” as the poet laureate said, referring to his alphabet approach to his journey – or even “Ashby-de-la-Zoom”, as he later called it.

Other libraries on his list over the next few days included Belper, Bacup, and Bootle – chosen, you suspect, not so much for the mellifluous sound of their names as for their down-to-earth impact on the ear.

For the moment the tour is online, and you have to sign up for a ticket in advance. It’s properly live, in that there is no catch-up link afterwards. And I’d like to say here and now that the inaugural reading of the Laureate’s Library Tour was one of the most moving and inspirational that I have attended, anywhere.

At the outset he said that he was delighted “to be here [in Ashby de-la-Zouch]. I’m delighted to be anywhere, to be absolutely frank … I’m very excited, and a little bit out of practice as well. Today represents something of a reconnaissance mission for artists of all kind.”

The first poem he read, ‘Zoom’, was one of the first poems he wrote or published. It starts in his home village of Marsden in West Yorkshire, “goes to the edge of the universe, and then comes quickly back … the idea in this poem is that language can take you from one side of the universe to the other in just a couple of sentences.”

His second poem, ‘Thank you for waiting’, is set in an airport and is a wonderful satire on the priority lists that airlines operate, in which you and me always find themselves at the back of the queue. Something to look forward to again, before too long.

There was a heroic ballad, ‘Song of the West Men’, about an Icelandic fisherman who survived being swept from his trawler in high seas, and managed to swim to land despite water temperatures that would kill most within a few seconds. It wasn’t written during lockdown, but well chosen, nevertheless. 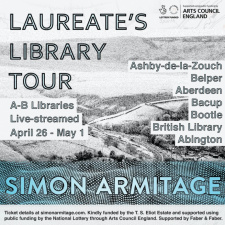 ‘Zodiac T-shirt’ was described as coming from a place where poetry and song lyrics overlap, containing lines such as “hand in hand when the bendy bus stopped”. Another travel poem, ‘Legends of the Crossings’, was inspired by Armitage’s walk down the northern section of the south-west coastal path, and his unwillingness to cross a dangerous estuary.

He introduced a poem called ‘Lockdown’ – written and published last year - which is partly about the tragic Derbyshire plague village of Eyam. Armitage said he felt an obligation as laureate to write such a poem, and said: “I think there’s been an idea that because you’ve had time on your hands you’ve had the opportunity to create a lot of work. And that’s true, up to a point.  But it’s been difficult as well. There’s been a lot of anxiety around … a sense of bereavement and worry about the future, and that doesn’t help as a writer. It doesn’t help me anyway … I’ve written at least two poems about a Velux window in my study, and a couple of poems about the desk  … it really is time to be getting out and about, again.”

Of the next poem, ‘Privet’, he said that his father “makes a cameo role” at the end of the poem. It’s a little more than that. Peter Armitage died only a few weeks ago. With that knowledge, the image of his father placing the young Simon on the top of the hedge –“that dividing line between moor and lawn” – is intensely moving. At the end of the poem the poet laureate took a few moments to compose himself, his eyes avoiding the camera.

He described his poem about David Bowie, ‘A New Career in a New Town’, as “a prose-poem”, then added quickly.” There’s no such thing as a prose-poem really, it’s just a sick joke in which I have collaborated on many occasion. I probably couldn’t say that in some of the university departments where I work but I’m saying it now, in my free time, on my holiday, on my tour.” He added of the title: “If you know your Bowie, you know your boy.” 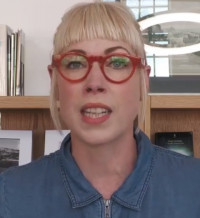 He finished with a poem called ‘Redwings’; another, very short poem, about his mother, “just to balance the books”; and a poem about a new cemetery near his family home which included a litany of the reservoirs around Marsden. The reading was concluded at midday. Just after four in the afternoon he popped up at Belper libary in Derbyshire for a fresh reading, in a different attire and with a completely different set of poems, and this time supported by Helen Mort, pictured.

At the end of the Belper reading he said part of his thinking behind the tour was "to celebrate libraries", as places where people are able to meet and talk, "places of great sharing ... of knowledge, information, imagination", where you can get away from the world outside, and be contemplative.

I once met Simon on the way to a poetry festival, falling into step with him at a traffic island in the middle of Winchester. He was somewhat startled to be accosted by me at first, but we quickly fell into conversation, and were chatting about the Railway pub in Marsden by the time he was greeted by the festival director, before his appearance talking about the Stanza Stones poems and trail.

You can call me biased if you like – but with his wry, unassuming but warm personality, Simon Armitage can legitimately be seen as someone who takes his responsibilities to the nation seriously and, like Marcus Rashford, is a person to look up to. Heaven knows we need such figures at the present time.

'Thank you for Waiting' was new to me, but it has everything.

I've now attended another reading, at Bacup, where the poet laureate said specifically that he was aiming to present a different set of poems at each library. It's a great way of appreciating the extent of his work. At one point he disarmingly burst out laughing at a double entendre in one of his poems ... something about pulling his own cracker ...

I had not heard 'Thank you for waiting' before. What a remarkable poem it is.