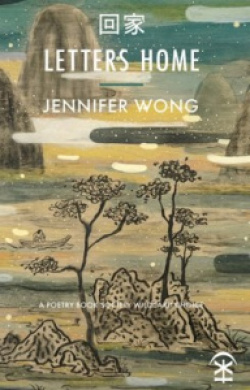 Translator, poet and critic Jennifer Wong was born and grew up in Hong Kong. She studied English at Oxford and received an MA in creative writing at the University of East Anglia. She is the recipient of the Hong Kong Young Artist award (literary arts) and the runner-up prize of the Bi’an Awards 2018 and she has earned a creative writing PhD on Asian diaspora poetry from Oxford Brookes University. Letters Home is a Poetry Book Society Wildcard Choice. These Wildcard categories celebrate radical, experimental, indie and form-breaking poetry collections which might not fit within the usual PBS Selection criteria in an attempt to represent the society’s commitment to poetry in its many diverse forms.

In PBS Bulletin (Spring 2020), Wong says that the literal translation of the Chinese title to her book is “returning home” which goes some way to explain why there are only a few poems that are presented in this collection as letters.

Among her subjects are poems that reference the writer Ba Jin, the film character Su Li Zhen,  fashion designer Miuccia Prada and graffiti artist Tsang Tsou Choi (aka King of Kowloon). Her settings move back and forth between Hong Kong (the Diocesan Girls’ School), Oxford (Wadham College) and London (the Joy King Lau Chinese restaurant in Leicester Street). Wong draws her inspiration from her personal experience of living in Hong Kong and London. Her poems explore issues of identity, migration, displacement and longing.

Where is home in this collection? Perhaps, with so many memories from different places, it lies within. Wherever it is, Wong brings it nearer through her own imagination by contemplating the migratory journeys of butterflies and greylag geese, by remembering the names of stations she used to travel through when in Hong Kong while travelling in actual time through stations in Kent, by keeping one of her watches seven hours ahead or by going out and enjoying the comfort of eating familiar food or indulging in Chinese customs at restaurants in London. In this respect her poems are multifaceted, working on parallel levels. References to Chinese food (lots of it) occur with regularity throughout this volume. It provides a taste of home and is one way of sustaining that East-West link to ensure that it is not forgotten or broken even though she has to admit when participating in these rituals, “Nothing is authentic / except what we are missing.”

Perceptions of the West are often touched upon with a wry sense of humour. In ‘The limitation of maps’ Wong confesses that, as a student, she “once thought / British people all lived in houses with rose gardens.”

In poems like ‘Truths 2.0’ Wong widens her perspective to address broader issues of political protest and democracy. In ‘Letter to AS(T)7’ the line “The year of the bird flu, we went about our business with masks and gloves” strikes a contemporary chord with our own pandemic today. In ‘The Colour of Race’ she picks up on undercurrents of racial prejudice when taking the bus from one part of London to another:

I catch one white woman saying to another,

Being a translator, it is not surprising that the subject of language is central to this collection. This is witnessed in titles such as ‘Chinese Classifiers,’ ‘The Language of Exile,’ and ‘Lost in Translation.’  In ‘Arrival’ she relishes wandering down the grocery aisles in Sainsbury’s where she rehearses English words. In ‘Daughter’ she writes:

If one day you look for

my childhood, you will find

it lies elsewhere, in a country

The notes at the end are welcome but I was disappointed to discover that several of the Chinese characters that appear in these texts have not been translated for English readers. While not wishing to be spoon-fed, I have to admit that there were several other references that were lost on me. After a lengthy search on Google I finally discovered what the initials CY stood for but a further search has failed to reveal what AS(T)7 means. I can only express my disappointment that these issues were not picked up at the editorial stage because it does detract from the enjoyment of the poems.

This collection succeeds in capturing the feeling that we are in two places at once. The way Wong handles this duality is admirable. In many ways, it is also unresolvable. As Wong states in her opening poem ‘of butterflies’:

if I am a Chinese girl who

or a woman from Hong Kong

who will stay in England.

This is a stunning collection that fuses together both personal and universal reflections in an intelligent and distinctive way. Fully recommended.

◄ 'Nothing moving but his quick beating heart'