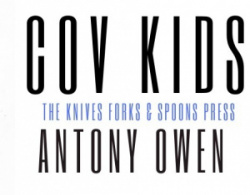 Antony Owen is best known in the poetry world and beyond for his passionate work about war and peace. It’s interesting to see him take a diversion from his usual subject matter in this collection about his home city of Coventry, which is UK City of Culture this year.

The cover of the collection celebrates Two-Tone, the dance music culture that came out of the city with groups like The Specials, spreading a positive, smiling image of anti-racism and multiculturalism, a richness that bigots had no answer to. As Owen puts it in ‘Ska Blue’: “Here is where our new skin becomes two-tone grey: / mix black and white, for this is who we are.”

Philip Larkin, born and raised in Coventry, dismissed his home city in one of his poems when finding himself travelling through on the train. Owen says of the peculiarly racist poet: “God help me, but if I met Phillip Larkin fixing his bike chain at his mistresses / I would ask him if his true love is Hull and tell him of our oils: / Black / white two-tones mixing to grey, washing him clean.” (‘Phillip Larkin’s Mistresses’). Misspelling Larkin’s first name only serves to emphasise Owen’s disdain.

An unsparing poem from Coventry’s own second world war blitz, ‘The House Three Doors from My Nan’s’, reminds us of Owen’s anti-war approach, in his refusal to omit grim details. In fact, his Nan attains quite heroic status in another poem, ‘If Boris Johnson Had a Cuppa with My Nan from Willenhall’, in which he imagines what a glorious encounter it would be, “anarchy in a teacup”.

This collection also pulses and fizzes with the energy and exuberance – and violence - of remembered youth, including prose poems such as ‘Park Lane Nightclub’ (“Spandau filled dance floors covered in glass, and teeth of a danced over pretty boy”), and ‘On the Pull in the Nineties’:

We used to have The Irish Centre filled to the brim like a badly pulled Guinness.

If you hadn’t copped off by the last dance you were nothing.

I remember that’s when insults were thrown. Then bottles

Other poems about Coventry nights out include ‘Mr Porky’s’, ‘Keresley Girl’, and the more sombre ‘Sunset Over a Stabbed Boy’. And there are anti-racism poems, such as ‘Calling Out Racism Coventry Style’, as well as a lyrical remembrance of footballer Cyrille Regis:

you learnt from shoelaces the smell of England,

the puree of banana, saliva and the soiled chalk of white men.

You shrugged them off like an own goal to decency.

There are two poems about the death of David Bowie; unemployment; an indictment of Ikea for causing the closure of several local outlets; and ‘I, Jaguar’, about Coventry’s proud car-making heritage:

I was made in Cov by men who drank ale and cocoa,

who lived as close as Browns Lane and dreamt a basic dream.

On Sundays they petrol-mowed their tiger-striped lawns, then

drove to church in bashed up suits and rusty, wheezing cars.

Jags, however, were far beyond most Coventry dreams:

I made Ravi proud when his chamois revealed his reflection in me.

In white paint he saw the sky-blue of his eyes in a true Cov kid.

He told his son about Jags as he waxed his knackered Cortina.

There is also a poem in memory of young Coventry poet Leanne Bridgwater, to whom the collection is dedicated.

To my shame, I spent a year at the university just outside Coventry, many years ago, but hardly visited the city at all during that time  – once just to hitchhike through it, and once to see Chuck Berry perform at the old Locarno ballroom. But Owen’s heart is big, almost to bursting, with love, for the place: “The Ghosts from Ghost Town are still around Cov doing their gigs” (‘Some Famous Cov Kids’). In conclusion I go back to ‘Ska Blue’, and quote more lines, such as this:

Here is where you shall leave your mark today.

There is good in the rivers of our blood.

We are Cov and this is our day.

Poet laureate's elegy to Duke of Edinburgh on day of funeral ►