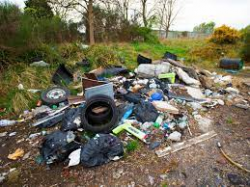 The tune is a mish-mash of "Star Trekking" and "While We were Marching through Georgia".  But the real debt is to Pam Ayres's "Littering" and to the dirty bastards who've dumped crap down our local country roads.

Fly tipping – we’re out for a nice ride

Fly tipping – the van is full inside

Mangle and a Hotpoint fridge,

Dumped beside a ditch.

Rolls and rolls of Baco Foil

Bags of turves and garden spoil

Fly tipping – we feel we play our part

John Constable did haywains and a Suffolk applecart

Our medium is fly tipping.

With a lion that’s lost its mane

Down your country lane.

Kid’s tin drum and half a flute,

Fly tipping – down all our country lanes

Fly tipping – our rubbish and remains

Contemptuous and ignorant we shit on your domain

We are England’s fly tippers.

Stockings worn by trans and grans

Cars and burnt out vans.

Fly tipping – we’re out for a nice ride

Fly tipping – the van is full inside

Thankyou Stephen. On a general level I have always opposed capital punishment. But I would make an exception for fly tippers.

Splendid stuff. Perhaps we should tip the tippers (not financially, of course).

I couldn’t agree more, MC. I agree too that local councils could do more; not least in being less draconian in what the binmen will take away and also abolishing the charges they make at the dumpit sites for taking certain items - paint and glass and rubble for example.
And thanks for the Like, Julie, Holden, Aviva and Hugh.

If iI had my way there would be an offence of "Despoiling the
Environment" - summary trial, with immediate imprisonment,
determined by type, seriousness - and also frequency where appropriate. The BBC Panorama TV programme did a recent
sting on a so-called licensed operator and bugged the rubbish,
They duly located it in a country lane and, when confronted, the
operator said he'd off-loaded it to another concern for disposal
as he was too busy - or something! The bottom line - the "muck" if
you like - stops at the local councils who seem very lax about
enforcing what law there is, claiming lack of funds and the
difficulty of enforcement etc. 😠