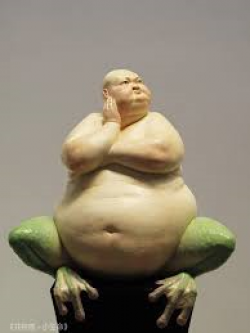 I confess to being a bit envious of those who self-identify on the issue of gender; that despite their meat and two veg they say they are a woman.  Or vice versa.  And I say “envious” because although  I’m not such a person myself (contentedly masculine, you understand, although I have been known to help the boys out when they were busy) it nevertheless strikes me that if it’s biologically permissible to determine your own sex, then why not your own species?

No more trying to balance on two legs for me.  Or spluttering up water while trying to do the breaststroke.  This is my golden opportunity to fulfil my destiny…

And who but the biologically fascist among you could argue against that?

Be careful, Stephen. I don’t think a lobotomy is reversible.
And thanks for the Likes, Nazia and New Shoes.

I thought about trying to self-identify as a Brexiter, just to see what it's like. (Reversible, of course).