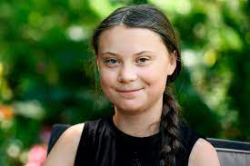 I’ve often heard cynics deride the efforts of environmental campaigners like Greenpeace or XR for their personal hypocrisy; or for ridiculing a little teenage girl by, predominantly, white middle aged men, for drawing their attention to the issue.  “How did they travel to their protest, then?”.  “Who made their clothes?”.  “Didn’t she fly to the States?”.  Criticisms which miss the point completely.

There isn’t a person in the world who doesn’t leave a carbon footprint.  We all need food, clothes, shelter, transport, heat, light etc, all of which require agricultural or industrial processes.  The point is you don’t have to do everything to make an input; you just need to do something.

Consider the maths.  Supposing I managed to achieve the impossible and reduced my carbon footprint to zero.  If you and the bloke next to you, and the one next to them and so on for the rest of the world’s population sneered and did nothing, the global carbon footprint would reduce by Me – ie one eight billionth.

On the other hand, if I only managed to reduce my own by 5% (maybe have one less meal of meat a week, or travel by car for one less journey for example) but persuaded you to do the same; and the bloke next to you, and next to him and so on, we would have reduced the global carbon footprint by 5% or one twentieth.

Nobody has to do everything.  But everybody should do something.

I’ve never been a believer that it’s the responsibility of others to spread the word, MC.

We should all do our bit within our ability to reduce unnecessary
pollution of both air and sea. But if it's a global world that we are
persuaded is the future, then, so far, "the word" is hardly going
around the world to where it matters most. At least the "disciples"
of the past set forth into unwelcoming lands to spread their
particular gospel. Where are their equivalents today? .

Thankyou, Stephen.
And thanks for the Likes, Greg, Tom, Aviva and Holden.

Not the best of reasons for not doing anything, MC, because others aren’t. Should we all abandon social distancing because some don’t?

And the lesson preached shows no sign of the word "endeth"!
But it doesn't seem to reach those most culpable. A bit like CND
busy preaching to the UK about atomic weapons but not to the old USSR.