Poetry in a family’s time of transition: how it helped Claire Dyer to embrace her child’s gender journey 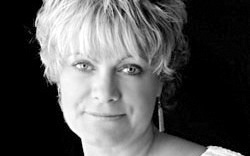 Claire Dyer is a poet, novelist, and mother. Her new poetry collection Yield is about her child transitioning from son to daughter, and traces the process in which she moved from grief to understanding and acceptance, to the point where all she wanted was for her poems to say ‘I love you’ to her child. In this interview with Greg Freeman, Claire talks of the moment when she broke down in tears during a poetry class, and how her daughter Lucy hopes that the book’s message may help other families navigate their own journeys through similar changes.

How has writing these poems taken you from a state of ‘anger and confusion’ to a book which you describe as a love story? How can poetry do that?

I suppose the main way that poetry can do that is because the poems themselves formed part of the adjustment to the new reality in my family.

They say time is a great healer, and it can also provide us with the space to adapt. There came a point in the writing of the poems when I realised it was taking more energy to mind about the situation I was writing about than it would if I accepted it. Not that I ever felt my child shouldn’t transition; my main feelings were of sadness that I had missed the signs that they needed to, that they had suffered, and were still suffering, and a kind of overwhelming grief over what I thought I was losing. Being a parent, my main priority was/is for my child’s happiness and therefore if I have to tread over my own feelings to help provide that, then that’s what I’d do. 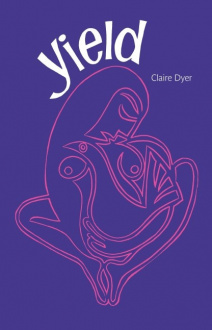 In that way the poems were cathartic, but they also served as a kind of diary; a way to chart the progression of change.

On the eve of publication, I asked my daughter why on earth I put myself through having the book published and having the poems scrutinised by others, and she took me back to first principles by saying that if I hadn’t written them, my head would have exploded! Of course, I could have kept the poems in my notebook and not made them public but, having been exposed to the debates other families have had/are having as their children transition, I wanted my poems to stand as testament to fact that a) it can be hard; b) parents make mistakes; c) we can get to a point of understanding in the end. I also wanted the poems to say a public ‘I love you’ to my child.

Have you written poems about family in your previous poetry collections – or indeed, in your novels? If so, how did you approach it? Did you seek approval of any such poems first, before sending them out for possible publication?

In short, yes! Family members have featured in both my previous collections, but I guess I’m fortunate in that as my family know this is what I do, they know they will appear in some form or another! Also, poets do mine their personal histories for material; they have to!

With regard to the novels, I guess the references are more oblique, as characters become composites based on personality traits I’ve come across, experiences I’ve lived through or heard about and material I’ve made up. It’s an established fact that it’s never wise to base a fictional character on someone you know as, by doing so you risk the ‘real’ person making it hard for your ‘fictional’ person to act/react/behave in your ‘fictional’ world. The best possible moment in writing a novel is when your characters take over and become the thrusts for their own stories.

Obviously, I would not have published Yield without my daughter’s permission, nor that of her brother or father. I’ve also sought permission to include plot points in novels where they nudge up against the lived lives of people I know. 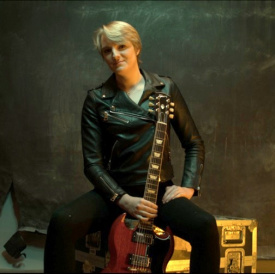 You said at your launch that you first showed your daughter Lucy a draft of this in 2019. Was that the whole collection? Had she been aware that you had been writing about them/her before then? What was her reaction?

Yes, she read a draft of the whole collection, and we discussed the poems that particularly resonated with her. I did add in a few other poems nearer to publication but by then she’d given me carte blanche, as she has with all the PR around the book. The family knew I was putting together the collection in the years running up to its launch and, whilst my son’s hopes were that the experience would prove cathartic for me, Lucy was also hopeful that by putting the book out there its message may help normalise the conversation around the topic and help other families navigate their own journeys through similar changes.

Lucy is an advocate for the LGBTQ+ community. She’s in the “unapologetically queer-trans punk rock band” Hunting Hearts whose agenda, as well as making good music, is to show that the queer-trans community has a voice too.

So we are each doing our thing!

You also said that you didn’t set out to write a book at all, and that the poems at first came sporadically and occasionally. But a Poetry School course made you see further possibilities. Can you expand on that?

I guess I did put the subject in the ‘too difficult pile’ for a while, but each week we would be set a homework assignment by our Poetry School tutor and, invariably, I would find myself looking at this exercise through the lens of what I was feeling at the time and so, when the poems came, they tended to relate in some way and, over time, become a body of work in its own right.

There are some powerful lines about motherhood in the poem ‘Trans’. Would you like to say more about this poem? How far along that journey from anger and grief to love were you when you wrote it?

I would say that ‘love’ never actually went away. It was that light that kept me travelling.

‘Trans’ actually came out of a homework exercise. We were looking at Martian poetry and I imagined what it would be like for travellers from another planet to arrive here and be faced with our ideas of gender. The poem came quite early on, and I hadn’t told many people about Lucy and I remember I broke down in tears while trying to read the poem to the class when it came to my turn. A dear poetry colleague took the poem from me and carried on in her voice. I shall always be grateful for the tender and gentle way she did it and for the class’s compassion.

You write in the poem ‘Bearded’ of seeing your son/daughter appear on stage. Is this the same performance that Lucy wrote about in her blog? Had she already come out to you at this time?

Yes, it is the same play and no, she hadn’t told us at that point. Liam, as he was then, had been asked by the show’s director to grow a beard for the part, which he did really effectively, but I do recall him very much looking forward to having it shaved off. He’d decided to join his father and have it done when we arrived on holiday in Turkey (Turkish shaves are amazing apparently!), but our flight was turned back just over France and we had to land at Birmingham, and wait for another plane. Our arrival was therefore quite delayed, and Lucy told us later that while we were waiting, she just wanted to pull the thing off. I can’t imagine how distressed she was but she didn’t let it show and so we had no real idea what she was going through.

Images of fish appear now and again in the poems – and in one of the last ones, that of a mermaid swimming out to sea. It seems a wonderful image – of release, of letting go.

I seem to be a huge fan of writing poems about fish! There are a few in Eleven Rooms and Interference Effects. I find their unknowability really beguiling and, as much of my childhood was informed by fishing trips with my father, their significance is very layered.

Oh gosh, where to start? Well, to begin with, my stay in Causley’s house was hugely impactful. I really did feel as though he was in the house with me, a quiet, benign presence, whose role there was to enable me to write.

I was working on the edits of a novel at the time (which later became ‘The Last Day’, published by The Dome Press in 2018) and the first few chapters of a book for a Fresh Eyes’ client, which has since been published and been a wonderful success for her.

I was also lonely as I’m not used to living on my own. Unbeknownst to me, Liam had written us his letter telling us he would be transitioning while I was away. My husband didn’t tell me it had arrived, but waited until I got home, where I arrived to find my elder son had come home too so we could talk it through together. My time in Causley’s house therefore is wrapped up in all of these things.

‘Eden Rock’ is, to my mind, a masterpiece of restraint and control. It is so packed with meaning, yet very lightly done. It also manages its timeline exquisitely, so that the reader is both in the present and the past. Additionally, it has in it all those wonderful things of life I adore: "a screw/of paper for a cork", for example. More information on my stay and the poem I wrote for the Charles Causley Trust at the end of my stay can be found here.

Being able to honour the last line of ‘Eden Rock’ in the poems in Yield is therefore, I think a great way to say thank you for the time I spent there, and to my family for successfully negotiating this particular time in our lives.

NB: I would just add that I have Lucy’s permission refer to her by old name, status, gender and pronoun where appropriate.

Claire Dyer's poetry collections are published by Two Rivers Press, and her novels by Quercus and The Dome Press. Her novel, 'The Significant Others of Odie May', is forthcoming in 2021. She curates Reading's Poets’ Café, teaches creative writing and runs Fresh Eyes, an editorial and critiquing service. She has an MA in creative writing from Royal Holloway, University of London and is a regular contributor on BBC Radio Berkshire. Her website is www.clairedyer.com

◄ 'They whirl out the door, the blue sky a sudden surprise'