Wow, readers! Write Out Loud's Matt Abbott pops up at a poetry slam - in the Beano! 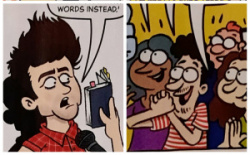 Here’s an accolade that I never anticipated adding to my poetry CV. In the latest issue of Beano magazine, there’s a cartoon poetry slam in which I’m one of the participants. Introduced onto the stage by slam host Theresa Lola, I’m competing against the Bard of Barnsley himself Ian McMillan, as well as some Beano characters.

My cameo came about through Beano cartoonist Hugh Raine. We met at a venue near Dewsbury, roughly around 2015 if memory serves correctly. He was performing as part of a duo called The Happy Accidents and we’ve loosely stayed in touch on social media ever since. So, when he asked me if I’d be up for being included, I was over the moon. 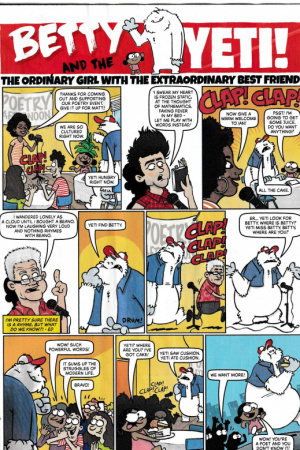 The verse that I wrote for the cameo is as follows:

I swear my heart is frozen static
at the thought of mathematics.
Feigning fever in my bed -
let me play with words instead.

Whilst my ‘rival’ Ian McMillan penned:

I wondered lonely as a cloud
until I bought a Beano.
Now I’m laughing very loud
and nothing rhymes with Beano.

I hope that Betty and the Yeti were impressed. Maybe it’ll even spark up a bit of interest in poetry amongst Beano’s (presumably young) readership. I used to love reading Beano when I was a boy, as did my dad, so it’s an incredibly surreal feeling to see myself as one of their cartoons.

You can buy the latest issue now from your local newsagents, with a RRP of £2.75. Enjoy!

'Self-publication? It’s a perfectly respectable way to get your book into print' ►

I trust the Beano 'article' is peer-reviewed?

Bad luck, Matt, that you were beaten by the Yeti ... but congratulations on featuring in the Beano. Forget any Forward prize nomination, that is true fame. Respect.