PISSING IN THE WIND 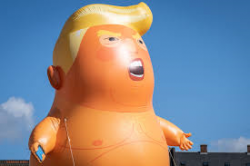 How many votes in the states does it take

To convince you Big Baby has lost?

How many times will he shaft you with lies

Before you see you’ve been double-crossed?

And how many times will he claim that he won,

The price of democracy the cost?

The answer my friends is he is so thick skinned

Your POTUS will piss into the wind.

How many staff will he fire till he gets

A team where no-one dare disagree?

How many’s jailed for the crimes he commits,

Pardoned and allowed to go free?

So how many times will you all turn your heads

And crow for him gullibly?

The answer my friends is you are so thick skinned

To see your POTUS is pissing in the wind.

How many times have you heard him say

The counting was massively flawed?

How many times have you heard him say

Joe’s win was nothing but voter fraud?

But simply just blustered and roared

His answer is just to repeat and to rescind

But your POTUS is pissing in the wind.

See all the times he puts his head in the sand

See all the times that he blubbers and cries

And how many times will delusion set in

Before he mans up to concede?

Your POTUS, I’m afraid, is pissing the wind

Your POTUS is pissing in the wind.

AWKWARD FROM THE GRAVE ►

JC - The word "evidence" has various degrees of meaning - direct/
indirect/circumstantial. The sum total presented to a court may or may not constitute "proof" (in criminal cases: beyond a reasonable doubt; in civil cases: beyond the balance of probabilities (here
in the UK), and decisions about these have often themselves been subject to grounds for appeal. Hence, my point about the
vital Supreme Court role as the ultimate arbiter of whether these
elections have been held in accordance with the strictures of the
Constitution. Procedures become paramount. I was interested
that machines used were found to have been connected to the
internet - denied by those responsible but open to challenge on
technical grounds about the truth of that denial. It's this sort of
breach of the Constitution that becomes relevant. There is still a way to go yet before a resolution either way will be achieved.

As a former bobby, MC, you will understand that an allegation is not proof. Several allegations have been investigated and found to be either baseless or Insufficiently significant to make a difference. Whether he concedes or not he will pack his bags on January 20th.

Fun - taken in good spirit for its depiction of the man in the Oval
Office. But what about the goings-on before the various state legislatures who have been taking testimony (sworn affidavits) and viewing
video evidence of apparent vote stuffing in machines AFTER media
and poll observers had been required to leave the building.
The game's afoot - with the Supreme Court waiting in judgement early in 2021 on
the all-important subject of compliance with the Constitution of the
United States. Make no mistake, this is a watershed moment in
US constitutional history, no matter who wins that judgement.
I look forward to another poem ready for what is happening - and
about to happen, as the case for not conceding continues to mount
up. When the BBC News uses phrases like "baseless claims" and "alternative reality" to describe Trump's position in interviews with those opposing him, then it is indeed a worrying situation for the impartiality of the mainstream media.that omits what now has to be
found on the likes of YouTube - see above "Senate Legislature"
hearings. I find the whole thing fascinating as it continues to unfold, notwithstanding the lack of anything on the MSM, unless
it is something hostile to the present incumbent. Nothing new there then.. .

This is fantastic, John.

Thankyou Aviva. And thanks for the Likes JD, Paul and Stephen A. And Vautaw.