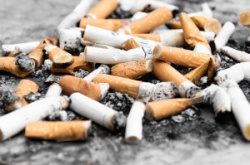 bits and odd pieces from cars, bikes and drones

lost keys and IDs from the weekend campaigns

bits of upholstery from numerous seats

a near empty bottle of cheap Asda rum

grocery remnants and foliage and twigs

an unwanted rose from a useless boyfriend

who tried but he failed and was dumped in the end

an overdue bill with a final reminder

a digital camera with a broken viewfinder

a large solid gob, the result of vile spitting

a trashed vaping remnant with its battery leaking

a sanitary towel, a disposable nappy

all kinds of gimmicks, cheap, crude and tacky

a filthy nude Barbie and a mouldy carnation

once either’s mouth would have not melted butter

now rather sadly they’re down in the gutter

the side of the track on the loud railway line

the infirmary frontage and the plantation gates

ginnels, back alleys and industrial estates

Wigan’s canals and the Douglas too

the sanitised hard floors of each public loo

the threshold of pubs at the end of the day

playgrounds and parks where the young children play

scattered a short step from any provision

a metre away from the smart council bins…

is where you can see my un-favourite things

Who said drainage was boring? ►

A great read. Thank you.

I'm flattered by all of your comments. Many thanks.
It is nice to be back here amongst friends and free of trolls! (Well, I haven't encountered any on here so far!).
My long absence has been due to work, family concerns and illness; but I haven't been idle. I've published 3 books this year (albeit not poetry).
It is wonderful to share, get pleasure and learn from each other here. I have learned much and am inspired by all of you. Thank you.

Love this, despite images now stuck in my mind.?

Great stuff! I thought it was going to go in the same direction as one I commented on some years ago called ' Truly not Julie ' by my buddies Patricia and Stef Wilde.

Top marks for the consistency in its imagery of how the mundane
detritus of life can reduce its quality when discarded without thought.
The occasional near-rhyming works in the overall picture on view.
Good one.