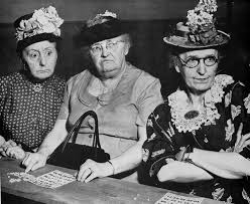 It is a well guarded miltary secret that there is a parallax or three-dimensional hole in number sequences. The most used of these is the 29th parallax which is vital for the technology of stealth bombers and other invisible "phenomena".  At the risk of alerting the CIA that this is now in the public domain, I shall try to demonstrate as simply as I can the 29th parallax. (This is the only truly true conspiracy theory).

As sweet as sweet could be

Went shopping to the Oxfam store

To buy a cheap TV.

They found a set that they all liked

And asked if they could try it;

They quickly said “We’ll buy it.”

They each took ten pounds from their purse

To split the total bill

The salesman took their tenners

And put them in the till.

(He saw his boss arrive)

”We’ve reduced that set this week;

“So if they gave you thirty pounds

To buy that old TV

Best give them back a fiver

With compliments from me”

The lad looked at the five pound note

He had to split in three

Which was beyond his simple maths

And then the thought occurred to him,

“I’ll give them each a quid

And keep the other two myself.”

So that is what he did.

He said he’d overcharged them

And gave them back a quid apiece,

Which meant they’d each paid nine.

And he’d kept two, we know;

But that adds up to twenty nine

So where’d the last pound go?

Thankyou for your kind comments, JD.

John, about PARALLAX 29, I did not need this right now. I must figure it out somehow. and I read your sample poem "IKEA" today, Will I ever be that good, NO WAY!

I think you’re on to something there, MC. Perhaps if we could cream off all those fractions of a penny from 65,000,000 people we could make bob or two.

To add to the fascination - if you divide the fiver in pence (500) by
three you get 166.6 <continuing>. But if you then multiply that by
three you get less than a fiver e.g. 499.9 continuing. And to think I
used to believe it was a exact science!

Thanks, MC. Cherish the memories.

Entertaining stimulating stuff. As my late mother might not have said:
A fraction of a penny for your thoughts!

It went through the parallax, obviously, Julie and Stephen.
And thanks for the Likes Stephen Atkinson and Lasse.

Oh yes, brilliant. I can feel some pain starting, so I'll wait on others' ideas.

I don't know, where did it go?
please explain, it hurts my brain!