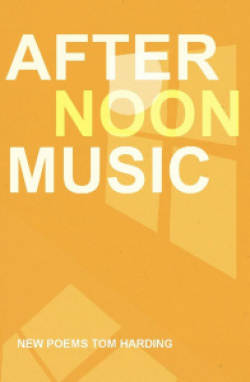 This review copy landed on my doormat, and within a few minutes I was deep in it, reading one poem after another, unable to put it down. This doesn’t happen to me as often as perhaps it should.

Afternoon Music, Tom Harding’s second collection of poetry, contains a generous number of poems that induce a mood of calm and well-being. The language is simple, the words unadorned. Moments are savoured, observing ants, bees, cats. A 400-year-old shark is celebrated. Much coffee is drunk in cafes. The mood is further lifted by Harding’s own drawings, often of girls or coffee cups. Two poems actually appear as illustrations, written on hotel notepaper.

Poems such as ‘Cinemas in the Afternoon’ set the mood, talking about a companion who was “studying Postmodern Narrative Theory”, and would “deconstruct / whatever we had just seen”:

where the hero proved himself

while I liked the French films

where the people walked around,

drinking coffee, talking too much

Tom Harding is editor of Northampton Poetry Review, and has also been a regular contributor to Write Out Loud. A number of poems in this collection can be found on his Profile page. There is also a brief but interesting interview with him on our website, posted after he won our Poem of the Week for the second time.

There is a nod in this collection to John Clare, the poet of Harding’s home county, Northamptonshire, and far beyond. Clare becomes a more important poet with every passing year, not just for his wonderful nature poetry, but also as we grow more aware of the 19th century common land seizures and thefts, the enclosures that helped to drive him mad:

on the frozen stubble,

familiar with every ruck and furrow,

“Old men’ are often spotted in the cafes frequented by Tom Harding. This is poetry written by a youngish man, which is much appreciated by this oldish one. The final, title poem is a series of images stretching over six pages, which seem to be almost but not quite haiku: “I hadn’t planned on you, then again, I hadn’t planned on anything … Sat watching the clouds move as if they have somewhere to be … The waitress walking home with her shoes under her arm …  A sign for silk underwear says we can have everything … Are we all part of some great orchestration? I hear the fly ask … Was that Coltrane’s Central Park West you were whistling? … Ah little sparrow, we’re tethered so lightly to this world.”

The collection is perhaps the poetic equivalent of ‘easy listening’ – ‘easy reading’, if you like – but I don’t mean that in a pejorative sense. A lot of poetry is difficult to read, either because it is not very good, or because its meaning is obscure. Is this ‘mindfulness’ poetry? Does it have a Zen Buddhist quality? Tom Harding’s poetry still takes you by surprise with its insights, and by the mood that it engenders. To maintain such steadiness and stillness of vision within this shouting world; there’s an art to it.

◄ 'A Bradford millionaire': line from The Waste Land is clue to £20,000 donation