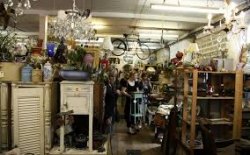 A recent trip to Brid prompted this.

Johnny used to run a second-hand shop on one of Brid’s back streets.  He was a dirty, fat old bloke who used to sit on a stool just inside the doorway.  I never saw him get off his perch: he probably couldn’t.

The shop stank of Johnny and contained a cornucopia of tat.  If you wanted anything you brought it to Johnny and gave him the money as he sat on his stool.  You’d be hygienically challenged to accept any change he’d grubbed about for inside his trouser pocket.

The shop’s gone now; I can’t even remember where it was and what’s replaced it.  If this were Chelsea it might be a sushi bar; being Brid, it’s probably a vacant plot or (which is entirely appropriate) a charity shop.

You don’t see many second-hand shops these days, my own theory being that the chazza has killed them off.  A second hand shop has to make a profit on the cost of anything they’ve bought off some thieving smackhead; a charity shop’s break-even point is bugger all.  So prices can be undercut, meaning there’s bargains to be had; not just bottom end stuff like books for 30p or shirts and trousers for a quid but quality stuff.  I got a pair of Loakes brogues in Christchurch (they retail around £200) for a tenner and a submersible pump to irrigate my garden (RRP £69.99 at the Garden Centre) for two quid.  And urban myth has it that in posh locations like Cheshire and Harrogate you can get the cast-off wedding dresses of footballers’ WAGs. Who could resist getting spliced in one with ROONEY emblazoned on the back?

There are still second-hand shops making a crust.  We have one in my town.  But they seem to survive on Fender/Squire guitar copies and air rifles.  Come to think of it, I bought a second hand Squire in a chazza for seven quid.  I wonder if I could get a tenner for it at the second-hand shop?

◄ SOMEONE FOR EVERYONE (SHE CAUGHT ME SNIFFING HER PANTS)

Indeed, MC. EBAY has cornered the market in “pre-loved” goods particularly (the nomenclature is so much more inviting that second hand junk) while Amazon must be coining it in during Covid. Everybody seems to have bought something through them. Their only vulnerability is their reputation for poor staff relations which they have addressed on the box with adverts showing happy, smiling people.
And thanks for the Like, Stephen.

JC - I think the likes of Ebay and various other online sites have
taken much of the trade that would have otherwise found its way
to the S/H shops we knew. But, like pawnbrokers (some of which
even have their TV programmes nowadays!), I agree that there
will always be a useful convenient outlet for "certain items" via
these back street "bazaars".

Thanks, MC. I recognise that my take on the demise of the second hand shop is probably premature. I suspect there will always be a gap in the market for those who are hard up and need to capitalise a few bob. (And also as an outlet for stolen goods).

An entertaining trip down memory lane for those like me - of a certain
vintage in the age stakes. I recall two such shops from long ago:;
one in the Paignton of my childhood (In what is ironically called
"Winner Street") and the other in my teen years, located on the way down to Bath Spa station in that beautiful city. They stocked a
range of stuff that fascinated me and their trade must have been a
difficult balancing act between honesty and opportunism in the
pursuit of making a living. Books, binoculars, cameras, long
playing records, war memorabilia (World War 2 was still close in
the memory) and small items of furniture/bric-a-brac seemed popular merchandise. Thanks, JC, for the chance to re-visit those old places.