THE LORD ALFRED SHIT-FOR-BRAINS OF CASTLEFORD 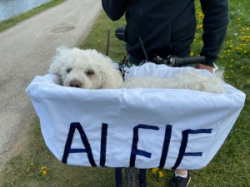 Let me say from the off that Alfie is a mongrel.  Oh, sure, my daughter describes him as a bijon fries something-or-other cross.  But the offspring of a pure Arabian and a pure-bred Asinara donkey is still an ass (or is it a mule, I forget).  So Alfie is still a mongrel.

An adorable little mongrel, I’ll grant you – to look at, at any rate. But a little shit when you get to know him.

Now, I’m the first person to buy into the view that it’s nonsense to ascribe human characteristics, emotions and personality traits to animals.  For the greater part Alfie bears me out; he only has two imperatives (-it would have been three but he lost his nuts in an accident with the vet-).  The first is his belly.  He is the greediest little twat you could meet on a long day’s march.  Indeed he laughs with me when I call him a “Little Fat F****r”. The second is territoriality.  When he is on the lead he barks and snipes at every other dog he passes on the street.  And this is where I start to question myself about human characteristics in animals.

See, you can tell that the dog Alfie is sniping at, some Doberman for instance, is thinking “Piss off, you little shit.  I could snap you in two but you’re just not worth it”.

And then there’s Alfie.  It seems to me that the range of human intelligence spans from duggies to geniuseses, so why not in other animals?  If Alfie was human I’m convinced he’d be a cretin.  And I don’t use the word disparagingly – it was until recently a medical term.

Likewise he seems fully conversant with the concepts of good and evil, with the things he does free choices in favour of deliberately being a little twat.  In the example above, he knows the Doberman can’t be bothered to kill him, or, if it tried, their owners would intervene and come to Alfie’s rescue.

And then there is the issue of snobbery.  My daughter has made him a pillion box to travel in when she goes cycling (pictured).  It started life as a Safeway basket but she’s done it up with an old bedsheet which now has his name on the front and it attaches to the handlebars.  And he rides imperiously, giving even the pedigree-ist of dogs beneath him a disdainful glance which translates as “Shift!”.

Of course, there is the possibility that these characteristics are the outward eccentricities of generations of upper-crust consanguinity and that he really is The Lord Alfred Shit-For-Brains of Castleford.

SOMEONE FOR EVERYONE (SHE CAUGHT ME SNIFFING HER PANTS) ►

I didn't think I'd need to explain to Norfolk folk, Po.

...consanguinity... Hey! Alfie what the fec# does this mean?