Pondering How I Got Here 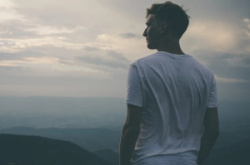 At school as a teen

I was sitting in class

With all my friends

When the teacher asked

I’ve a question for you all

In this form group today

What would you do

If a friend told you they were gay

“I’d beat them and punch them”

The one friend said

“I’d kick them, and hurt them until they were dead”

The whole class cheered and seemed to agree

And that was the start of self denial for me

A crucial time in your life

Where your hormones run free

Trying hard to understand of what you might be

For some they’ll explore

And they’ll do it with pride

Or there’s others, like me, who do their best to hide

How could I admit to my friends back in the day

That I had confused thoughts and might of been gay

How could I confess, put my life at risk

Explain that my thoughts for both genders were mixed

Another story a few years later in life

I remember ear piercings where all of the rage

I was a young man now and coming of age

So I went to the Jewellers

They loaded the gun

A stud in one ear is what I had done

Feeling happy and trendy with what I had

I got home, through the door and bumped into dad

"What’s that in your ear" his stern voice asked

"You’re a bloke not a woman" he started to huff

For days he was angry and we didn't speak

I fell further in denial, I already felt weak

If that’s the reaction for an innocent stud

Certain if I came out I’d be misunderstood

How could I be honest, bring the family shame

So the secrets I was hiding

Just two of many why I struggle today

Bravely said! Life tends to be a matter of adapting to ensure some sort of survival, made even harder by confusion; a reality that can
continue throughout its span...long or short. I suppose that the trick
is to be comfortable within one's own mind and body, aware that
there are certain aspects that will always be challenging - and not
always overcome.

you deserve the world. more power and light to you!