The Forests will Echo with Laughter. Part 3. 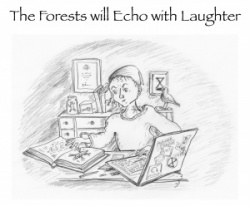 The sun was filtering through a gauze of green

and ripples of lustre rolled pearl-like over moss

as if her path lay deep beneath the sea.

seemed polished with a gloss

that flung each iridescent spark of light

before they sprinkled, sharp and diamond white,

to soak into the vibrant

And oceans she could see, great lakes of blue

lapping at the bases of the trees:

the bluebell flowers of April in full bloom

that writhed as though the woodlands were bewitched,

a weird sensation stole into her head

that she was being watched.

and pausing by a shiny shrub of holly,

she thought she saw a figure, stealing through

the trunks some way away,

So there was trepidation in the stride

that accessed the arena of a clearing.

A twisted, apprehensive knot inside

the fabric of her being.

the person waiting calmly in the glade.

It was John Greenwood’s bearded face that eyed

the timid half a score

of footfalls she made.

And all she knew whilst folded in his arms

was that this was the way it had to be.

And all she felt was ecstasy, then calm,

and John Greenwood was gone,

elusive as the breeze.

Upon the only shelf within her treehouse

Amelia kept the jewel of her pursuit:

atoned its lack of taste

by dint of looking cute.

That afternoon she stared into its eyes

enquiringly, but answer there came none.

Then pleadingly she begged it to advise.

“Amelia, what you done?”

and as the blackberries plumped and summer veered

to autumn, there were none

in camp who didn’t know.

Her belly showed the tell-tale augmentation

and some discerned her diet almost double

as if she ate for two. At demonstrations

they kept her out of trouble.

When winter fell the wind howled sharp and bitter.

Amelia, swaddled up in layers of blankets

acquired a talent as a jumper knitter,

and helped to peel the veg

for what they termed their “banquets”.

It was a frightful New Year’s Eve when she

Her sisters clustered round her, chanting “Breathe!”

The men observed the wind

and black cloud in the skies.

as poor Amelia agonised in labour.

The valiant treehouse bucked and lurched and swayed

to shame its feebler neighbours.

No doctor, midwife, soap, nor anaesthetic.

In torment none would think she could survive

Amelia battled with an energetic

doggedness till she heard

the baby was alive.

And beating back oblivion, before she drifted

to the solace of unconsciousness

they passed the baby to her and she lifted

then hugged him to her chest.

Once she sensed the last gasp of the storm,

and none were ever certain if she saw

atop the baby’s head.

◄ The Forests will Echo with Laughter. Part 2.

This is the final part of an epic poem I have been serialising on Facebook all this month. Scroll back on my blog to see the previous two parts. I’m doing it as a fundraiser for Mèdecins Sans Frontiéres, and if you’d like to help support this cause you may donate here https://www.justgiving.com/fundraising/Timothy-Ellis2?utm_campaign=lc_frp_share_transaction_fundraiser_page_donation_received_-_first_donation&utm_content=10b2c713-52d1-452f-8b7e-ecbeede6c264&utm_medium=email&utm_source=postoffice&utm_term=1589914522566