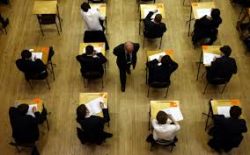 Fellow Baby Boomers will no doubt recall that rite of passage that was the Eleven Plus.  For non-Boomers that was an exam every kid took at the age of eleven (as it happens) to determine your next educational path. Those who passed went on to the grammar school, those that didn’t didn’t. They went on to the secondary modern, and for the vast majority of the population that “cut” set the seal on the rest of their careers.  Not all, to be sure.  Some who failed the exam would go on to become entrepreneurs or managers or some such – Alan Sugar and Michael Morpurgo are well-known examples.  But by and large, for the vast majority that brutal pattern held.

From the vantage point of the 2020’s many look back in horror at the unfairness of putting 11 year olds through such trauma when so much depended on it.  Personally, I don’t recollect any trauma at all.  I don’t remember knowing in advance of the exam; I just turned up to school one day, sat down at one of the “socially distanced” desks and did the exercises Mr Gibbons gave us.  Sometime later we were told if we were to go to the grammar school, the secondary modern or that short-lived phenomenon of educational fashion – the technical/grammar.

I myself was sent to the grammar school where an intake of 90 or so of us boys were streamed by ability (presumably, the scores in the 11+), making 3 classes of 30 – a further application of the robust meritocracy.  I made the “A” stream.

This pattern of streaming continued up to the fifth year when, as 16 year olds, we took GCE’s.  But at the end of each year until then we underwent exams in all the 10 subjects we had taken, followed by relegation and promotion between the streams.  Looking back, this seems perfectly reasonable to me now; kids from the B and C streams may have been late developers and deserved moving up.

But these were worrying times for me.  In all five years up to GCE’s I had steadfastly finished between 25th and 28th in theses exams and peered ominously at “the drop”.  Two of the brightest boys in the school said to have had IQ’s over 150 plummeted into the C stream and never came back.  I never was relegated as luck would have it, and went on to take “A” Levels where I found I was much more suited to a new style of critical and contemplative learning.  It was pleasant to get away from the nick-name “Fulham” who themselves flirted tantalising close to relegation for almost every year throughout the 60’s.

The fashion these days (has educational philosophy ever been anything but a series of fashions?) is to view such robust selectivity disparagingly.  But as a beneficiary of the system I can’t complain.  It served to gain a working class lad and son of an electrician and a cleaner access to a prestigious university in an era when Higher Education places were much, much fewer than today.

Thanks for your thoughts Stephen and MC.
Your recollections remind me of one of the contracts I worked on as a management consultant, MC.
It was at BMW. They had a practice of periodic “chips and chat” lunches. Every new starter in a given period was invited to meet all the management team over fish and chips. The rule was that no-one talked about work. I found myself sat next to two “rubbing rags”, the men who buffed up the cars before they were sent out to dealerships. It turned out that one was a management accountant recently made redundant and the other had just completed his final qualification to captain chartered ocean-going yachts.
It made me realise that you may never know what talent your people have unless you ask.

Hi John. I remember my 11 plus as half way through the exam I had a nose bleed and had to be taken home. A few days later the school let me re-sit it (alone in a what seemed a suddenly giant classroom) and I managed to pass, going on to grammar school and muddling through in the middle of the B-stream. I have mixed memories of school - were taught Chemistry by a series of sadists, French by at least one ex-Nazi and Latin by a small man who was once thrown out of the window by an adjoining class (on the ground floor, I hasten to add). Actually, I'm not sure if they really are so mixed at all.

I have an ambivalent attitude to grammar schools. Yes, they did allow some working class kids (like me) to 'get on' a bit, but a system which consigns the great majority of children to a second-class education at 11 can't really be right. Perhaps the main problem is that selection on the basis of one exam is very imprecise; from memory, many of the kids in the C-stream should never have been at grammar school, while many who went to Secondary Modern should. But being at Secondary Modern seemed to drag you down, while the grammar school didn't seem to pull you up, unless you were pretty bright in the first place.

Enough of these ramblings. Thanks for an entertaining piece.

An informative/fascinating blog, with worthwhile comments. I enjoyed
my time (not too successfully) at a small country town grammar school before moving to the capital to take up an apprenticeship to
my public service career - itself a veritable "open university" in
the study of human nature and patterns of behaviour, during which
time I went in for ongoing self-improvement via the services
of local libraries and exploring the world of the arts. I've never
subscribed to the view that a young person's life should be determined by any achievements gained during school years. Life
per se about acquiring knowledge, not least self-awareness and
the perception of human nature at work. A satisfying "marker" of
the latter occurred one afternoon when I had to take custody of a
patient from a well-known mental hospital and while waiting for the escort, we had a conversation that can only be described as a
a mercurial education in mental agility. My reward was when, on
being collected for return to the hospital in question, my wayward conversationalist turned to me and thanked me for "being so understanding" about his situation.
I rarely if ever had that from any so-called sane individual in all
my years performing that duty. Education never stops!

I’m sure you’re right, Greg; there will have been good and bad of all manner of schools. And we all speak from personal experience. My own boast is that my grammar school after it went comp became the worst school in the country according to govt league table and was eventually closed.
I think academies, like grammar schools, Graham, come in good and bad varieties. My daughter works at one where the standard is quite poor, largely owing to unsupportive parenting.
When I see the quality of university entrant these days, it doesn’t do anything to shake my view that our current system of secondary education is inferior to the path I trod.

Interesting to see the comments on this piece. I went to a Technical Grammar School, which was an amalgam of both the traditional academic Grammar and a Technical College, where all streams of ability were covered. We had a full range of technical facilities like wood/metal/drawing and even a foundry. I am still surprised that they did not prevail. Sadly it is an underachieving Academy now!

I meant to add that four of my grandchildren go to a good Grammar now but have to travel out of the county to attend (even though it is only ten miles away.

Just as there were all sorts of grammars, there are all sorts of comprehensives, John. Our two kids both opted for the local one at the end of our road - a 'leafy' one, I'm sure some would say - and both ended up with university degrees, as I didn't. Well, I did in the end, via the Open University. Thank you, Harold Wilson.

I think that's also an old man's thing, Po.
A different perspective, Greg. But not that different. I'm not saying I enjoyed grammar school. But it did work form me. Not just the outcome (university, career, model pillock of society etc) but in that I believe that, ironically, I got a far more
"comprehensive" an education than if I'd have either failed the 11+ or gone to a comprehensive school as my kids did.

Everyone's experience is different. I got to a grammar school via the 11-plus. It did nothing for me. Imagination confiscated on the first day of term. I scraped in to university despite its discouragement, and then dropped out a year later. The fault may have been mine as much as theirs. I wouldn't play games for them on a Saturday afternoon, preferred to stand in the Shed at Chelsea.

Dam you J.C. I have got no dry undies left because of you!

When I left the Coal Board after 21 years, I slipped out like your dad, Po. A card would have been nice. The rumour was that they’d raised £3/4 million to get rid of me.

My dear old dad worked all his life in the boot and shoe trade.
As a pounder for Start-Rite shoes, making shoes for all the Royal children... As they still do today!

"Footwear That Gives Kids the Freedom to go Where They Want, How They Want. Fitted Shoes as Worn by HRH Prince George.

The day he retired he walked out of the factory, like any other day.

The management never even knew he had gone.

I could have written this J.C... Not as well as you can no doubt tell.

Back aching work, that imbued the sweet smell of a poofder.

I started my 5 year apprenticeship including 3 years at 'Tec' and began my life as a fully qualified electrician receiving the huge sum of £7/10s a week.

Just so the youngsters can understand