On line poetry - and history in the making 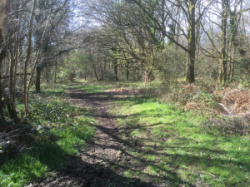 I've tended to have an old fashioned view of libraries - a very positive one, but limited to book borrowing, quiet spaces for reading and a children's corner. Of course, there is much or to a modern library than that and I have become involved with a couple of aspects of Surrey Libraries of which I was previously unaware.

The first of these is a poetry blog. This is a regular feature which includes poems old and new. Two of the recent new ones have been mine and I will no doubt submit more in the future. The mix is interesting with quite a few local poets featured besides names such as Edward Thomas and Hillaire Belloc and a special section for Lockdown Poems. There is also a list of links for more poetry on line. Well worth a look.  https://npdsurrey.wordpress.com/welcome/ .

One of my poems on the blog is entitled 'Recovery' and I recently received an email saying they were 'delighted to inform you that following a request from our colleagues at the Surrey History Centre, your poem 'Recovery' has been selected for inclusion in their archive of Surrey during the pandemic - this includes photos and written works such as diaries and journals - which future generations may draw upon to inform them of what it felt like to experience such an event. '

That feels quite an honour and the archive itself is another example of a response to the current crisis. More information on  https://www.exploringsurreyspast.org.uk/share-your-experiences-of-life-during-shutdown/

After so long it was perhaps not surprising
that the move to touch met with some resistance,
permission was a while arriving,
and cautious habits proved quite persistent.

Old friends who had hugged without thought,
shaken hands, slapped backs, kissed cheeks,
had shrunk to images on a screen
and retreated over isolated weeks

till distance as a habit began to form
and many feared returning to old norms.

So many times they’d told each other
they longed to touch their friends and their relations,
but now each one came to discover
a reticence, a terror of contagion

so, like a recovery from any estrangement,
they were cautious, took their time
as if by tacit, pre agreed arrangement -
no words, a dance, a mime,

and slowly distances were breached,
hands extended, approaches made,
agreements on behaviour, on protocol, were reached,
assurances given, fears allayed,

till friends could greet the loved ones that they’d missed
with shake of hands or even with a kiss.

The things that must be done ►

Well wrought for distraught times. Congratulations for getting your message out there to appreciative minds.

Well done, Tony, and especially on being archived at the Surrey History centre as well.

This poem is apt in today's situation.