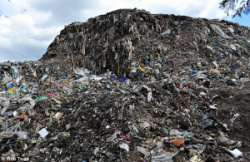 They found the sacred site

And used their soft sable brushes

To clear the earth from their finds

And look part of a plate with the lettering McDon

So possibly owned by someone from the Northern Zone

Inflation devices with logos of Asda and Lidl

Ancient Gods lost to the mists of time

They catalogued their finds by registering images

The three-pronged artefact with trailing ribbons

Of blue and brown and twisted green and yellow

That no one has a clue about – but maybe ceremonial?

These silver tubes that may have contained sacred oils

Buried in this ancient mound

A depository for our ancestors

Who cherished these shiny objects enough

For future generations to find

Then place them in exhibitions

And wonder at their primitive beauty

And the longevity of mankind

◄ Eye Of The Storm

Bull In A China Shop ►

Thanx Po & Mike
glad you liked the premise and the poem - I don't think we realise, as a species, what impact we can have as individuals on the future's perception of use - sad indeed ?
thanks for taking the time to comment
Ian

Enjoyed this piece .. there's a sadness at its heart that creeps up unexpected. Thanks, a strong poem.