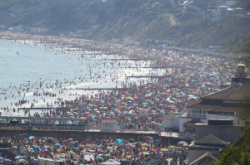 At first they said ‘infect the herd’

but experts told us ‘that’s absurd,

you will cause deaths in the old.

What sort of shepherd risks the fold?’

So they put the cattle in the pen

only to be let out when

the time was right, or so they said,

they didn’t want their people dead.

And farmer Boris calculated the mood

Saying he’d protect us from the cull

Whilst ruminating and spouting bull

As time moved on there was little fun

And the flock began to miss the sun,

as soon as the gate was left ajar

they came stampeding from near and far

to gather, together, on the beach -

and touch such special folk as they.

What was their Independence Day

turned out to be the end of trail.

The cattle drive was sure to fail.

Death paddled from the sea, some souls to reap

from the lines of gambolling, stupid, sheep.

Eye Of The Storm ►

cheers Po - glad you liked it 😃

This is a bloody master piece.

I think my whole street must think I'm having a "When Harry met Sally" moment Yes! Yes! Yes!

BM - yes, they're all around us, infecting our healthy common sense
with their sense of entitlement and me-me mantras.

Is it possible to have a stupidity pandemic?