Competition closes in 20 days, 16 hours. Get details and Enter. 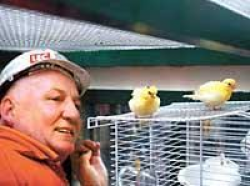 “I can’t remember if I cried

But something touched me deep inside

The day the budgies died.”  (They were canaries, actually).

It was something that gained me a notoriety it took a long time to shake off.

During the year-long Miners’ Strike of 1984/85 management staff not in the National Union of Mineworkers were seconded to pits on safety cover.  This entailed ensuring the mines were continually ventilated and pumped to prevent the build-up of gases and water, all done with the approval of the NUM who recognised the need for pits to be viable once they returned to work.  It tended to be engineers (mining, mechanical and electrical) who did these underground inspections and repairs with office softies like me assigned to Control Room duties (monitoring remotely the underground pumps and fans, and keeping contact with the engineers).

We worked a round-the-clock 4-on, 4-off shift pattern which I thoroughly enjoyed; it was, perversely, the best year of my 21 in the coal industry.

When I turned up one day for the first of my roster of 4, my mate who I was taking off shift told me,

“t’Boss’s after you.  You’re in bother.  You didn’t water the fucking canaries”.

I didn’t have to make an appointment to see him!; he came storming into the Control Room, his face red and apoplectic with rage.

I followed him at a trot to the aviary where he had strung up by the neck the dead birds which had died of dehydration; which was all of them.

“Get rid of them, you useless cunt!” he told me.  (The mining industry wasn’t a place for the easily offended, you understand).

“And stay out of my fucking way!”

Since then I have had a second career of over 20 years as a sought-after management consultant advising Chief Execs.  I have held the position as Verger at Selby Abbey and been Chairman of a Further Education College. And I’ve met with two Prime Ministers.

But when old timers from the coal industry gather to chew the fat of All Our Yesterdays no-one remarks on that.  The look in their eyes forewarns me of what they’re going to ask.

“Aren’t you the silly bugger as killed them canaries?”

◄ THE MAN WHO MADE MODERN BRITAIN

Yes, I think occupations which operate “on the edge” breed a robust character in their people. The armed forces, trawlermen, Police, medics, miners, firemen etc they live with danger and it shapes them, not least in their humour.

JC - you're right about the style of humour. But like any job with the
pressure of ever-present risk, a little gallows-humour helps a lot
with its nod to a shared experience.

Quite, MC. As I suspect in your sector too, colleagues can be very cruel in their humour. I was known as Robert Stroud, the Birdman of North Gawber.

Of such things are legends made. Your co-workers were clearly all
of a twitter before social networking arrived.
In so many words
You got the bird(s)!!
And found yourself pigeon-holed for life by the sound of it! I won't mention an apparent necessity in mining: being eagle-eyed. 😌