I write and perform poetry that tends to be ridiculous, silly or unpleasant or sometimes all of these but the one thing all my poems have in common is that they make me (and the audience sometimes) laugh. I hope they make you laugh, too, but I apologise now if they don’t. I especially enjoy writing pseudointellectual poetry that is so far up its own backside it can wave to itself. I also enjoy a ruthless rhyme. I perform poetry for beer, money and adulation. Or a bag of crisps.

Boobs. Listen to it if you're a bit lazy,or read it here if you are not lazy: Boobs My boobs have never been what you call big; Unlike my friend Julie's; she paid for her rig. They were massive and ripe, a triple F cup, She looked like Mae West but she couldn’t stand up. She kept tipping over, with frightful abandon; At least her big boobs gave her something to land on. But she was persuasive; she told me I'd be Much less of a woman, without surgery. I went to the surgeon, the signs I misread, “What's that bulge in your pants?” " It's my wallet" he said. "I'll slice and I'll dice your pathetic wee boobs, Then I'll drill and I'll fill them with old inner tubes, Then I’ll pump them with silicon, formed into rounds, Then I’ll charge you the fee which is ten thousand pounds. Nipples are extra, one lump or two?" I made my excuses and cried in the loo. I mused on the issue and, even if wealthy, There's no way I'd muck up my boobs, 'cos they're healthy. They do the job well, they fill up a bra, Blokes say that they're lovely; they're fine how they are. So what if you lie down and witness your tits Slop sideways and backwards down into your pits? So what if they're weeny, a pair of fried eggs Popped out by the teeniest hen on two legs? You can be confident they won't explode On economy seats on the way back from Rhodes, You can be certain that each time you sneeze Those silicon bastards won't shoot round your knees. So, when you see boobs with a person attached and you know that your own ones are very mismatched, Stick your hand down your bra for a bit of a feel, Your tits might be weird but at least they are real. 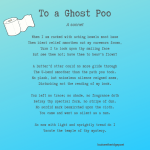 Louise 'boobs' reminds me of my granny and her sisters some how. Tommy

Chris from the Gford workshop here.

Just a self promo spam in order for you to czech out my stuff here! :)

Hey, thanks for the comments on Wednesday's Child. I didn't have any maternal instinct at all. Didn't want kids, didn't like kids. But then I had a couple and luckily (for them) the instinct kicked in!

I love funny poems, especially ones that are written by women. I have tried my hand at a few myself. I always try and start with a funny one at open mic before I leave the room suicidal with the deeper ones :) My only problem is that I get incredibly embarrassed if people laugh at my jokes, which leaves me with a 'riddy' as it's known in Scotland.

Think I might need to purchase your book, anything to give me break from myself ;)

Glad I found you looking forward to more

Thank you, Anthony and Kenneth, for your very kind words. I'm afraid I'm not very highbrow or deep so only daftness falls out of my head. It's nice to know I'm not the only one that likes a bit of that. I leave profundity to the clever people.
I am attempting to have a "proper" website at www.louiseetheridge.com if you'd like any more silliness.
In the meantime I will explore what you both like to write!
Best
Lou

A most welcome scattering of refreshing humour
among the grey clouds of "enigmatic, profundity" all too often borne on the winds of W.O.L.

I look forward to future blogs.

Hi Louise - and welcome to WOL. Loved your "Boobs" poem: I'm a fan of clever/funny stuff (and boobs, if I'm being totally honest!) and anyone who can use rhyme with skill to entertain. I hope you enjoy the site and would love to see/hear more of your work - we could all use a few more chuckles these days!