New York rhymes: journalists start their day with a poem 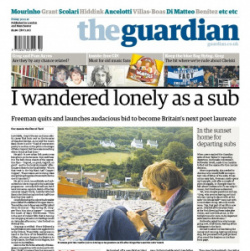 A recent revelation that hard-bitten journalists on the New York Times listen to a poem before discussing the daily news agenda has come as a bit of a surprise to those who don’t regard poetry and journalism as natural bedfellows.

According to the Times’s National editor Marc Lacey, “when the National desk gets together to discuss stories, it can be a grim half-hour. We dissect natural disasters. We reconstruct mass shootings. We delve into political scandals and all manner of domestic tumult. Recently, though, we added a new feature to our morning meetings aimed at inspiring us and boosting our creativity before we embark on another long day of editing the news.

“I got the idea from an unlikely source: my son’s high school English teacher, Anne Baney. During parent-teacher night, she explained how she reads a poem at the beginning of every class from Poetry 180, an anthology of contemporary poems compiled by Billy Collins, the former poet laureate of the United States. The room turns quiet when she reads, she told us. If she ever forgets to start off the day with a poem, her students remind her. They like it.

“While there was some initial eye rolling when I first suggested the idea, Morrigan McCarthy, a photo editor and former poetry major, got it. She started us off with a poem called ‘The Book of Hand Shadows’, by Marianne Boruch.”

Since then NYT journalists have heard poems by Wordsworth, Langston Hughes, Charles Simic and Paul Verlaine, among others. Lacey concluded: “What effect has such beautiful and rhythmical writing had upon us as journalists? Much like a good poem, that’s open to some interpretation. I believe we are more pensive every morning. I can tell by the faraway look in my colleagues’ eyes as we hear profound truths communicated sparsely and majestically. That is the goal of our journalism, too.”

I worked for many years as a sub-editor at the Guardian in London – and I can’t, to be honest, recall much interaction between poetry and journalism during my time there. That’s not to say it wasn’t in our thoughts – well, mine, at least. In the odd spare moments between subbing stories I would check poetry websites on the internet – and on my break occasionally take to a park bench in nearby St Pancras to polish a poem or two. I tried to be surreptitious about it, but my poetic efforts were noticed by my colleagues when it came to my retirement presentation front page (see picture).

Not only that – my Guardian colleague Trevor Breedon has also turned to poetry in retirement, and met with real success, winning competitions in Canterbury in 2014 and 2015. And former Guardian and Sunday Times reporter Aileen Ballantyne recently published her first full collection Taking Flight, which includes poems about the Lockerbie disaster, which she covered as a journalist.

So maybe they’ll soon be starting with a poem at the Guardian morning conference, too. And a limerick at the Sun, maybe?

'Consider me a prospector probing with my own gold' ►

How interesting. But the media has surely engaged in imaginative
creativity for years. 😏.