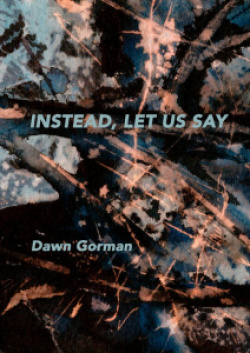 Award-winning poet, arts practitioner and freelance editor Dawn Gorman strongly believes in poetry as a participatory and collaborative medium and devises and runs community poetry events that includes working with the elderly and also with schoolchildren with a particular interest in aural history. Instead, Let us Say is her third pamphlet collection and won her the 2019 Brian Dempsey Memorial Prize.

The 25 poems in this collection offer up a compassionate take on daily life with all its fleeting emotions: a father and son walking along the water’s edge, reflections on looking at a memorial spoon dated 1664, thoughts at the scene of a fatal road accident, finding meanings in foreign parts, and a meditation on the colour orange.

The opening poem ‘Clout,’ is a tightly-compacted synthesis of working class life. In it, Gorman makes a play on the title by revealing it in its varied meanings as a noun (a piece of cloth, a lump of coal) and as a verb (to cuff, hit, strike with force). All are implied in this poem about a miner’s wife and her relationship with her husband.  The poem lives up to its title by exuding an authority all of its own.

The title of her collection is intriguing. It reads like three words lifted from a sentence that leaves us with questions at either end. It may be that a solution is to be found in ‘Portrait in the Museum’ where that incomplete sentence might read something like this: ‘instead of thinking the worst, let’s put a positive spin on things’. Looking at a portrait of an unknown lady by Eden Upton Eddis, Gorman writes:

If I knew your name

I could Google everything,

give this bright, young you

fevers, the date you died.

Instead, let us say you were happy.

That you liked Verdi, Tennyson,

the scent of lilies, plum jam…

Let us say the lines to come

around your eyes will be

the footprints of your laughter.

This fine poem, in which Gorman draws her own portrait of what she sees, is a good example of her work. A second ekphrastic poem, ‘Inside Out’, after a sculpture entitled Interaction by Alex Relph, explores connections between the “angles of gold in the garden” and the “unexpected points against softness” of the elbows and knees of a nine-month-old foetus in its mother’s womb.

These artistic interactions are in accordance with her creed. Gorman is very keen on fostering links with other artists. musicians, photographers and film-makers as well as with other writers having worked, for example, on projects with The Orchestra of the Age of Enlightenment and having collaborated with artists and textile designers at the Edinburgh Fringe.

Poems such as ‘A Quick Curve,’ ‘On Hearing Alice Oswald Read Memorial’ and ‘Maiden Stakes’ are models of accomplishment. Every word is carefully chosen and nothing is out of place.

Several of her poems employ memorable turns of phrase: “a bantle of babies” (‘Clout’), “the cold slap of sea” (‘But it’s Like This’) and “bouncy-ball planets” (‘Small Steps’). Her observational powers come to the fore in ‘Bouquet for the Lost’ and concern for the environment is evident in poems such as ‘Westonbirt Arboretum’.

Having a soft spot for sheep, I was drawn to the poignancy expressed in ‘Ewe, with Julia’ with its sonic pun on the word ‘ewe’. It reads like the title of a painting and, in keeping with her interest in other means of artistic expression, art, photography and poetry come together seamlessly in this short, 10-line poem about a ewe who remembers the loss of her lambs taken away from her on a fateful morning by a man who came through the gate not so long ago.

Gorman has an ear for powerful last lines. Some of them come full circle like “the perfect arc” in ‘Graphology’ that mirrors “the shock of tiny lines and curves” or the word “hit” at the end of ‘Clout’. Similarly, she ends her poem ‘Memorial Spoon, 1664’ whose first word is “plague” with the word “death” and then there is the word “orange” that comes at the end of the poem called ‘The Second Colour of the Rainbow’. It is this attention to detail that makes these poems so satisfying.

The way the poems have been presented in sequence has also been clearly thought out. Poems expressing similar ideas or exhibiting specific characteristics are placed next to each other on the page. For example, the “calligraphy” in ‘Graphology’ is paired with “the engraver’s careful script” in ‘Memorial Spoon, 1664’

Reading this third collection, it is abundantly clear that Gorman is a poet who has already mastered her craft. Highly recommended.

New York rhymes: journalists start their day with a poem ►