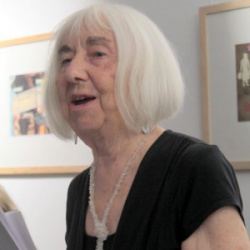 Hylda Sims, a poet and musician who was one of the pioneers of skiffle, and in more recent years host of the Fourth Friday poetry and music nights at the Poetry Café in London, has died at the age of 87.

Her father was a founding member of the Communist Party of Great Britain. During the second world war, she attended the radical Summerhill school in Suffolk, before leaving in her mid-teens. She joined the Young Communist League, and then the London Youth Choir, travelling with the choir to festivals in eastern Europe. By the mid-1950s also sang and played guitar in coffee bars in central London, while working at Collet's book and record shop.

From 1954, she formed the City Ramblers with her partner, modernist painter Russell Quaye, and  John Pilgrim and John Lapthorne, playing a mixture of jazz, blues, music hall and folk songs, and in 1955 set up the weekly Studio Skiffle club in Holborn. During the British skiffle boom of the mid to late 1950s, and later, Sims toured widely as a member of the City Ramblers, and recorded for the Storyville and Topic labels.

In the 1960s, she studied at Hull University. She later taught English as a foreign language in London and Spain, and established a residential community on the South Yorkshire moors. She published three novels and two collections of poetry.

Songwriter Billy Bragg said on Facebook: “Sorry to hear of the passing of Hylda Sims, formerly of the City Ramblers Skiffle Group. One of the few women involved in the front line of the skiffle movement, she was a genuine bohemian and great company. I met her when writing Roots, Radicals & Rockers and was delighted to find that she was still writing and performing topical songs well into her 80s.”

The Poetry Society said: “We were very sad to hear of the death of Hylda Sims, a stalwart of Poetry Café programming for 15 years and of the wider poetry scene for decades more. As the founder and indefatigable host of Fourth Friday, she connected up the creative energies of poets and musicians; she was also a brilliant performer of her own wonderfully inventive poetry and songs.”

The last Fourth Friday evening, with Hylda reading and playing with the City Ramblers Revival, alongside guests Dinah Livingstone and John Wheeler, was held at the Poetry Cafe on 22 November.

Whilst my own experience/memory of skiffle is somewhat limited
("Freight Train" among a few others), this seems to have been a
very interesting life, deserving of being marked beyond its musical
and literary borders.