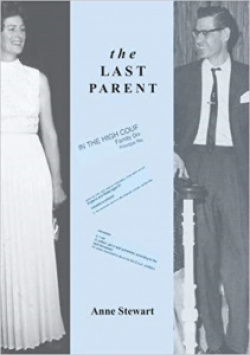 Bereavement, loss and love interweave in Anne Stewart’s latest collection. Her sequence ‘The Last Parent’, 31 poems that make half of the collection, stands out for its insights into  the process of mourning, including administering the assets, and a great amount of paperwork.

Her mother died in 2004, and her father in 2013. When her father died, the poet seems to have felt the loss of both of them more deeply, as if her mother had still been alive when her father was with her. Unfortunately there was no time to rest and shut down. She was the administrator with the authority to deal with the deceased’s assets and the bureaucratic procedures and the paperwork that goes with it. The process is long, difficult, sometimes inexplicable, almost absurd and tedious. For this reason, the poet’s voice is split in two, the emotional grieving that speaks of love, loss and memories, and the “more prosaic, voice of Administrator”, cooler and in apparent control, making lists and keeping on track:

At such a time, you must divide yourself

One part is allowed to feel the loss.

the other must substitute clubs for hearts.

The one is permitted to fall apart.

The other must keep itself intact.

The two voices sometimes interweave in the anger triggered by bureaucracy and arguments in the family or helplines that seem of no help. Apparently useless notes and objects belonging to her father suggest memories beyond the administrative procedures. Administering his assets becomes a journey into her father’s past that makes her understand better who he was:

Who knows what’s lurking in his recent past

You’ll find them in his wallet, address book,

Her search is both funny and revealing, such as the objects she might find “underneath the veg box in the fridge”. She collects and keeps his things, which “conjure only a ghost of him/and chain it to the ground”, in a wish to revive his presence and soothe the loss:

before you let him go – before you throw away the bingo cards,

Your notes about the M V Empire Windrush … What do you

keep them for? Except to mourn

This also means knowing herself while she makes sense of her grief: “but I – my grief a sack of fists still blindly hammering – / though I take in the words, can’t take in / what they mean.” (‘The Inevitable Truth of Love’)

Love and loss entangle in her journey through bereavement and towards acknowledgement and acceptance. Grief needs time to be absorbed; she needs to go back to the roots of life, to the earth, the living things that are part of the cycle of life and death:

I want the whole earth to myself;

my soft self, the flowers and bees,

the worms, the world a meadow.

I want no shattered joy from leavings.

No nevermores to break my heart.

I want to be at one. Me and the earth

and every living thing beneath mankind.

Just us. I want to be safe next time.

I want to be soft, unknowing, blind.

The poet eventually wishes to merge the split voices in a wholeness that cannot deny the experience of the Administrator, the anger and love. It is V.O.I.C.E.S. (View Of Informal Carers Evaluation of Services), “[a] tick-box Questionnaire” that haunts her till the end and ironically connects her to her split self. But she also becomes aware “that the cup of love//is like that floating iceberg tip where what you see/shows nothing of the depth of it”. (‘Parents, eh?’). The journey has brought the poet to a deeper awareness of her loss and love that are inevitably interwoven in ‘The Last Parent’:

take up your pen and write it out.

Not just the love, the loss, but the anger

and the happy days there must have been.

Other poems in the collection show a rich use of powerful images and original themes:

A bed is a light bulb that tugs you half-asleep

impossible circles in search of solutions

that tugs you to half-wake   afraid of the night

A bed is a light bulb in the night sky   vengeful

determined. You must sew up your eyes   know

that the meter must run out of shillings sometime.

She experiments in language and forms as in ‘Summers’ in which the poet’s voice intermingles with quotations from Jean-Michel Galibert, Épicier à Saint-Jean-de-Fos by Marilyn Hacker, highlighting solitude and absence in the summer landscape. This gives her insightful abandonment when life comes back to her with the scent of the sea. The poem ‘Mid-afternoon’ expresses well this experimental characteristic of Stewart’s poetry:

lying back on water

eyes shifting half a sky

They are impressions in form of notes, free verses that meander on the page evoking a surreal world the poet voices in a state of wonder. This openness to life and positive attitude that empathises with the landscape is conveyed in touching images and striking lines. It is merging with life that encompasses both love and loss, love for her dead parents as well as love between her parents, and the inevitable loss that is part of the cycle of life.

◄ 'He always came back just in time for the bell'