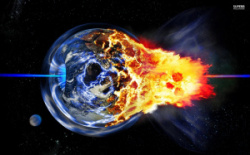 We all stopped listening

And damned the poor

Who fled the gun

And drowned in seas

They tried to run

God turned its back

All they could do

Had the last word

But we pushed ahead

Cos no one cared

I have refrained from saying much here over the last few years
However there is a time to speak and a time to act.

Or just continue to bury our heads in the sand

Don this is perhaps something you should watch.

some interesting points Po.
Graham - your 'cosmology' appears to be 'if it's not affecting me it isn't happening' and 'if those complaining affect me they are a bigger issue than the problem'.
When you say 'we' will all be long gone before the planet burns up - you really mean 'you' will be. 500 million animals already dead in Australian fires + untold human tragedies, loss of life, injuries, property damage - but 'hey-ho, it's not happening in the leafy suburbs so no need for me to do 'owt and sod the buggers who raise the issue'
I'm enjoying the debate - but some of your arguments are beyond risible.

I for one, think that climate change is not only inevitable... it is already happening right now!
Climate change denial ‘activists’ who keep denying that the Global weather patterns are changing and that the overall temperate is not heating up perhaps need to look a little deeper.

Leaving aside the Big Bang theory for a moment...

There are enough things going on daily that prove beyond any shadow of doubt we are in deep shit.

Things are reaching biblical proportions in some parts of the world, extreme droughts, extreme flooding, higher temperatures, snow in places that have never seen snow in living memory.

The air we breathe becoming so toxic with countless poisons.... Some of which, are being deliberately sprayed in the ionosphere, costing billions of pounds/dollars to covertly combat Global warming.... or speed it up!

All of the above plus other man-made things too insidious to mention.

Not one single thing, placed under scrutiny, I believe in 'Ian’s poem' is incorrect.

It is great Ian, as it allows us to debate.
It is not hard hitting enough, I would say.

Unless we change what we are doing, and how we are doing it, humanity will cease to exist long before the end of the world!

I don’t have the answers to our problems, however at the very least, I do acknowledge there IS a problem...

There are actually many problems.

I propound however that we are a part of that problem, albeit a very small part of a much, much bigger issue.

It is not us causing the change in the weather (well actually that is a misnomer).

We live in a digital age that is consuming huge resources, some of which on this small spinning ball in space are finite.

This is perhaps what we should be concerned about and understanding more.

"Forgive them for they know not what they do."

Climate change is not inevitable - it only becomes so when narrow minded denial 'activists' tell us it is so .

I should read up on your cosmology Ian. We’ll all be long gone before this planet burns up!

However a good start would be reducing the amount of power the so-called ‘cloud storage’ from data centres requires. You won’t hear Climate Rebellion moaning about that, they’re all glued to their phones taking selfies.

I’m not in climate change denial, it’s obviously changing but taking my own bags to Sainsbury’s won’t do a lot of good even though I do!

Good golly gosh what have you done?
Ian, this thread's on fire
We've got enough of this down here
Without more down the wire

Gonna mention just for you
Brian, o'erpopulation
I feeling good now done that for ya
Yep I'm, feeling good.......

Someone's gotta pour some water on this flamin' thread.

Over-population? Don't worry Brian, 'Agenda 21' will sort that out.

Please do pm me, rather than take over this thread.

I will start a new thread about 5G and 'the dead'.

What a strange course of events that are unfolding before our very eyes.

We all see what we want to see.

Ian your comments are as insightful and as welcome as your poem.
Apart from the bit about "The afterlife is unprovable"

Let those with the eyes to see and all that.

The highest Court in our land decided to not let that evidence out.
Declining the one person who could/did do exactly that, to do so.

only if you do Brian 😉if you think it's an issue why don't you write about it? I've enough issues of my own without writing to order ;-)

thanks you for the kind words - and those that aren't so kind 😉
Graham - if you're looking for a 'fucking mess' I would point you in the direction of Australia at the moment - sorta pales into insignificance that you and others were 'a bit put out' that folk organised and drew attention to the state of the world doncha think?
Climate change is not inevitable - it only becomes so when narrow minded denial 'activists' tell us it is so (hello Donald - where's your morals?) It's a poem about a point of view Graham - the fact that the smoke's got in your eyes (and others) is sad for you, us, our children and our children's children.
The afterlife is unprovable - even in my lifetime I've seen a planet that doesn't burn on the early evening news - so your general thrust of a counter argument is laughable.

I'm gonna save the planet
Yippee yippee yay
Get a 'lectric heater
Wood for fire? No way.....

It is so difficult for any of us to divorce our true feelings from the geo-political stance that so many of us finish up taking.

The real truth is, no-one can save the planet. It will die and we'll all be long gone before that happens.

The 'saving the planet' mantra is akin to believing in an afterlife, it's only there to make people feel better about the inevitability of us all dying one day. It pacifies us.

The same people who were demonstrating in London (and elsewhere) about climate rebellion left a hell of a fucking mess behind them when they were finally wound up! How do you explain that?

If people want to live tidily and create a less negative footprint that's all well and good, but as for saving the planet.......King Canute comes to mind.