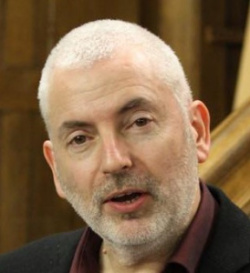 A few weeks ago I was saddened to hear of the death of one of my great sporting heroes, the former England Test cricketer Bob Willis. But the sadness was lifted to some degree – even though I blubbed – when I read poet Andy Jackson’s ‘Otwituary’ in his memory. Here it is in its entirety: “When looking back / they will not tell / of futile spells / on lifeless tracks / but eyes like steel, / the arm a blur, / the win secured, / the miracle, real.” The “miracle” refers to the last day of the Third Test against the Australians at Headingley in 1981, when Willis took eight wickets and captured a match – with a little help from Ian Botham – that England had looked certain lo lose. To my great fortune, I was there, on that day.

Andy, pictured, has been tweeting his ‘Otwituaries’  – short elegies to the departed that were at first limited to Twitter’s original 140 characters – since 2012 to celebrate those who have had an effect on him, “positive or otherwise”. All the Otwituaries are written very quickly on the day their subjects pass away, and include actors, musicians, sporting figures, TV personalities, writers, explorers and assorted others of note. Another recent one records the death of David Bellamy.

The effect that his Bob Willis Otwituary had on me made me keen to talk to Andy, and find out more about the genre of poetry that he has created single-handed:

What exactly triggered your first Otwituary, on Ernest Borgnine, in 2012? Was he a particular hero of yours?

Not particularly ... it must have been a slack day on social media! I had edited a few anthologies of poetry inspired by popular culture for Red Squirrel Press over the years and was interested in the way poetry could be used to explore more immediate cultural issues - movies, TV, music, radio, sport. Ernest Borgnine was an interesting actor in that he specialised in unconventional character roles. It was astronaut Neil Armstrong's death a few weeks later which really cemented the idea though - that one was a real labour of love.

Why then did you keep going, for more than seven years?

I should start by saying that no one asks me to do these Otwituaries, and I guess I could stop doing them any time. I'm also aware that they are not everyone's cup of tea, and may even be viewed by some as mawkish or narcissistic, views which are perfectly valid.

I'm fairly unprolific as a poet in that I write very few poems, meaning it takes years to get enough poems together for any kind of collection. The Otwituaries, however, have become a kind of regular exercise in that they are unpredictable in frequency and theme, but short enough to do quickly. It's got to the point where some followers of the project now expect to see an Otwituary in the wake of a celebrity's death.

Morbid though it may seem, I do enjoy the challenge. That sense of unpredictability means sometimes several may appear on one day, depending on the whims of the Grim Reaper - three in a day is the most I've ever done, or hope to ever do. I don't actively look forward to a celebrity death, but you can be sure the next one won't be too far away.

Do you have a strict regime, ie do you only allow yourself a few hours to write the Otwituary? Is speed the point? Are there restrictions on word count, too?

Yes, speed is the essence of the Otwituaries. As soon as I hear, I get to work as soon as possible, so they are usually rough and ill-considered, and many of them I would like to try again with the aid of time for reflection. Originally they had to be 140 characters max - i.e. tweet-length. When Twitter upped the character count to 280 it gave me scope to be a bit more expansive, but I still aim for concision. Word count isn't something I consider, though - just characters. I also disseminate them through Facebook and Instagram, neither of which are subject to the same restrictions on length, but I still keep them mercifully brief.

Have they been collected and published as a book? Do you think there is any scope for that?

No, they haven't been published as a book, although a publisher has shown an interest. This publisher would like to see them more widely disseminated and a bigger following built up before taking a risk on a book, which is understandable, although I've no idea how to build up such a following except by doing what I do at the moment.

It's fair to say they are not particularly widely read at present (even for poetry). There may be some scope for a 'Best Of ...' or even an annual almanac of Otwituaries. My concern would be that, as well as lacking the necessary polish, they are so 'of the moment' that they may not have much longevity. Also, in some cases they do come over as a pastiche of Private Eye magazine's EJ Thribb's 'So Farewell Then...' poems, themselves a parody of maudlin hagiographic elegies of yesteryear. It's a fine line and I often get it wrong.

Occasionally there is some sort of connection between you and your subject. Clive James is one, I believe?

I tend to write an Otwituary only if there is some connection with the subject - someone who has had an influence on me, however minor. Such influences are not always positive - there have been Otwituaries for Margaret Thatcher, Cecil Parkinson, Ian Paisley and others which have been less respectful, shall we say. Because they reflect my own interests, there tends to be a disproportionately large number of astronauts, pop stars and minor British actors represented. Clive James was a sad one to do as he had selected Double Bill (one of the popular culture anthologies I mentioned earlier) as one of his three books of the year in 2016. I was a huge fan of his writing, both his TV and cultural criticism, and the unpretentiously moving poetry which poured out of him in his final few years.

As well as editing two anthologies inspired by film and television, you’ve also been involved with two poetry anthologies connected with Dundee, a cycling-themed anthology, and with WN Herbert edit the political poetry blog New Boots and Pantisocracies. Would you say that you are attracted to the quirkier side of poetry?

Oh, definitely. My usual line on this is that while better poets get on with exploring the grand themes - love, loss, grief - I am happy to rake through the sweepings on the floor of their laboratories. This means I am attracted to odd themes or ideas, to areas where poetry doesn't often go. And there are lots of those! My sometime co-editor Brian Johnstone once very kindly acknowledged that I had revealed to him that it was acceptable to write serious-minded poetry about your cultural heroes, no matter how inconsequential they might seem in the scheme of things. I hope a few others who have been involved in my daft little projects over the years have been similarly empowered.

I'll do the one on Boycott!

'That sense of unpredictability means sometimes several may appear on one day, depending on the whims of the Grim Reaper - three in a day is the most I've ever done, or hope to ever do': well, Andy's turned out three today, on Kenny Lynch, Nicky Henson, and Peter Snell https://otwituaries.blogspot.com/

I have a spiritual affinity with the idea of writing this sort of thing,
having been moved (some years ago now) to write about the
death of the equally famous Denis Compton.
The heroes are all going now
And we are left to grieve;
A fond farewell, a final bow,
Too soon they take their leave.....(extract)
The subject of this news item is to be encouraged to continue on his
path toward adding to the spectrum of entertaining and imaginative poetry.