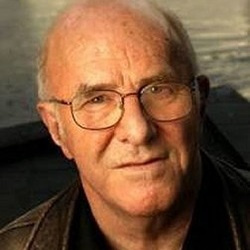 The acclaimed writer, broadcaster and poet Clive James has died after a long illness at the age of 80. He won many plaudits for his TV programmes and criticism over the years. But after his terminal diagnosis with leukaemia and emphysema in 2010, he increasingly turned to poetry to “start saying goodbye”.

One of his most popular poems, ‘Japanese Maple’, published in the New Yorker in 2014, was about a tree given to him by his daughter. In the poem James delighted in the tree's presence in the back garden of his Cambridge home, while challenging himself to live until autumn in order to see its leaves "turn to flame". The poem became a viral sensation, and was included in the collection Sentenced to Life, which was a bestseller the following year. The award-winning poet John Burnside said of this collection: "With its mixture of technical verve (James had always been a master of form) and self-deprecating wit to leaven the pathos, it seems that he has reached the pinnacle of his powers ... it would be hard to imagine a more elegant and restrained farewell."

James died at his home in Cambridge on Sunday, his agent confirmed. A private funeral attended by family and close friends took place in the chapel at Pembroke College, Cambridge, on Wednesday afternoon. United Agents said: “Clive died almost 10 years after his first terminal diagnosis, and one month after he laid down his pen for the last time. He endured his ever-multiplying illnesses with patience and good humour, knowing until the last moment that he had experienced more than his fair share of this ‘great, good world’. He was grateful to the staff at Addenbrooke’s hospital for their care and kindness, which unexpectedly allowed him so much extra time. His family would like to thank the nurses of the Arthur Rank Hospice at Home team for their help in his last days, which allowed him to die peacefully and at home, surrounded by his family and his books.”

James said ruefully of ‘Japanese Maple’ that he had “confidently stated that when the maple tree in my garden turned to flame in autumn, that would be the end of me”. But he had been left in the awkward situation when “the tree turned red and I was still here, steadily turning red myself as I realised that I had written myself into a corner”.

Another poetry collection with a similar theme of impending death, Injury Time, was published in 2017, followed by The River In The Sky (2018), a book-length poem and an autobiographical meditation on the meaning of life and how to live it. In 2014 his translation of Dante's The Divine Comedy was published in the UK and the US. In October 2019, Somewhere Becoming Rain, a collection of a lifetime of his critical appreciation of the work of Philip Larkin, was published.

His own website said that earlier this year “a long and ultimately unsuccessful operation to remove a cancer on his cheek in February 2019” left him frail and almost blind. Yet he spent the spring and summer of 2019 writing and editing an autobiographical anthology called The Fire Of Joy, a collection of the poems that first awoke in him his love of poetry. The book includes his notes on each poem. It was finished a month before his death, and will be published in 2020.

Earlier poetry collections by James included Poem of the Year (1983), a verse-diary, Other Passports: Poems 1958–1985, a first collection, and The Book of My Enemy (2003). He published four mock-heroic poems — ‘The Fate of Felicity Fark in the Land of the Media: a moral poem’ (1975), ‘Peregrine Prykke's Pilgrimage Through the London Literary World’ (1976), ‘Britannia Bright's Bewilderment in the Wilderness of Westminster’ (1976) and ‘Charles Charming's Challenges on the Pathway to the Throne’ (1981). During the 1970s he also collaborated on six albums of songs with Pete Atkin. A revival of interest in the songs in the late 1990s led to the reissue of the six albums on CD between 1997 and 2001, as well as live performances by the pair.

He was born in Sydney in 1939. Among many awards and honours, in 1992 Clive James was made a member of the Order of Australia, in 1999 an honorary Doctor of Letters of Sydney University, and in 2003 received Australia’s premier award for poetry, the Philip Hodgins Memorial Medal. He was a Fellow of the Royal Society of Literature, and in 2008 was awarded the George Orwell Special Prize for a lifetime achievement in journalism and broadcasting.

Don Paterson, James’s poetry editor at Picador, said: “Although it was hardly unexpected, it was still a shock to hear of Clive’s passing; despite his frailty in his later years, his life-force seemed almost indestructible … he was unfailingly warm, kind and hilarious company right to the end, and we’ll miss him terribly.”

Many of our greatest writers, and I claim Clive James as such from both sides of the world, was supremely comfortable and skilled in any number of public genres and literary pursuits. He was a master of many, a true polymath and a peerless observer of the human condition. I asked a bookseller the other day whether they had any of his books in stock, only to be told, sadly no, but that his publisher(s) were already urgently reprinting almost all of his works. He was honoured and admired in life and, of course, will be celebrated and immortalised in perpetuity.

What is billed as 'his last interview' is published in the Observer today. James talks a lot about his love for Larkin https://www.theguardian.com/culture/2019/dec/01/clive-james-last-interview-philip-larkin-rachel-cooke

I came across his poetry by accident, but was really glad I did. Some of the things he wrote really grabbed at the viscera.

It was when his focus turned from his public persona to his private life that his poetry bloomed. Not only did he write brilliant poems but also he read lots and lots of poetry: “If you don't know the exact moment when the lights will go out, you might as well read until they do.”
― Clive James

I 'discovered' Pete Atkin in the early 70's, saw a few of his gigs, and bought his albums. It took me a while to realise that Clive wrote the high quality lyrics. Clive has been on borrowed time for years, but a sad loss nevertheless.

I can recommend the albums.

One of a kind in his ability to combine humour and a perceptive
human warmth in his personality and his writing. I recall his TV
shows with affection, a fitting and, in many ways, a life enhancing personification of the interviewer/chat show host. His writing was
to be a fine farewell to a life in the public eye - one that now sees his name take its place in the public memory for as long as the
written word exists. I think he would have settled for that !