George the Poet: 'Why I turned down an MBE' 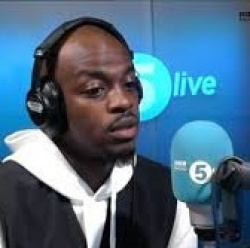 The spoken word artist George the Poet has said he turned the offer an MBE earlier this year because of the “pure evil” perpetrated by the British empire.

He made the revelation in the final episode of his BBC Sounds series Have You Heard George's Podcast?, in which he discusses the legacy of colonialism. A recipient of an MBE becomes a Member of the Order of the British Empire.

The poet, whose real name is George Mpanga, said he would not accept such an honour until the UK took meaningful steps to mitigate some of the consequences of its colonial history.

Earlier this year his podcast won a clutch of awards. Speaking on his BBC podcast, he said he declined the award, having initially indicated he would accept it because of his family’s reaction.  “I turned down an MBE. A friend asked me if I would accept it, I just saw my parents’ faces and without thinking I said ‘yes’ and then I took a minute and reflected, reflected on my status and I felt a burning sensation in my chest,” he said.

“Your forefathers grabbed my motherland, pinned her down and took turns. They did that every day for a couple hundred years and then left her to treat her own burns. Now all of her children are born with a set of unique concerns and gaps in the information that we really do need to learn and none of us know why, why we got absorbed by a ‘higher entity’, why I have to fight for my identity.”

The artist, who was born in Harlesden in London, graduated from Cambridge, and is of Ugandan heritage, has won critical acclaim as a musician and a social commentator. In 2018 he was elected as a member of the national council of Arts Council England. He apologised on the podcast to an unnamed friend who he said had recommended him for an MBE on his assurance that he would accept, saying: “I didn’t know I would feel this way.”

Mpanga said: “I see myself as student, admirer and friend of Britain. However, the colonial trauma inflicted on the children of Africa, entrenched across our geopolitical and macroeconomic realities, prevents me from accepting the title Member of the British Empire.  “The gesture is deeply appreciated, the wording is not. It will remain unacceptable to me until Britain takes institutional measures to address the intergenerational disruption brought to millions as a result of her colonial exploits.

“I have no issue with other black people who have embraced this title – I encourage variety of thought across our society and within my community. I encourage future generations to seek the relevant information to make an informed decision. What do the words British empire mean to you? I love this country but I do so with transparency.”

◄ 'Heading home to the sound of the last few trout splashing'

I do not "yearn" for the British Empire - but merely sought to put
some recent relevance in context. We tend to treat ourselves like
those old monks who loved to flog themselves into some state of "pardon us for our sins" perdition.
That said, I'm certainly in favour of a category award for sport and the arts - and go along with GS's comment about the groan-worthy
state of awards in general.

Maybe link honours to the Commonwealth, since that still exists.

The whole honours system is a crock of shit much of which is paid for by allegiances support or plain donation.
Greg is right. Poets should have a poetry medal, sportsmen/women a sports award etc. make them relevant!

The key words in your second comment, MC, are "arguably" and "was". The rest is extremely hypothetical. My point remains. Like it or not, yearn for it as you may, the British Empire does not exist any more. People do need to be reminded of that fact, perhaps today more than ever. It's time for a new label, surely?

This nominee might do well to consider the following in context..
The history of humanity has been littered with "empires" going back
thousands of years. The British Empire was certainly widespread
and arguably the most benevolent of all of them. It should be
remembered that it was the wall against which Hitler and his allies
banged their collective heads in their efforts to bring the "abyss" to
the free world. Had they succeeded, places like Africa would have
become sources of disposable human resource - fodder for the
slave labour/death camps perfected by the Third Reich and the
Japanese. This nominee would not exist to be able to say no to
a medal that includes its "British Empire" reference.

Sorry to hear that Brian Carter was overlooked, MC. But George the Poet's rejection of a gong - I believe Benjamin Zephaniah turned down a similar offer on similar grounds more than a decade earlier - raises an important point. The name of these awards really needs to be changed! After all, we don't have an empire any more. Has no one noticed that? Give them a sensible, inclusive name that everyone can relate to and rally round ... how's that for an idea?

I just think of a multi-gifted individual like the late Brian Carter,
author of memorable books like "Black Fox Running" and "Jack",
poet, artist and champion of wildlife in his life and his articles for a
West Country Newspaper - and recall how the recommendation for
an honour in his lifetime was ignored. He took it with grace and
good humour. But his work lives on.in what he left behind.