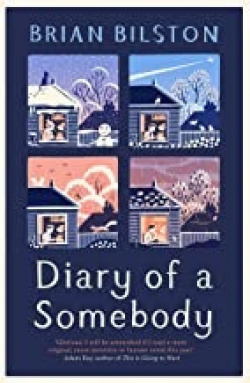 A comic novel by Brian Bilston, who is variously known as the “poet laureate” or “Banksy” of Twitter,  is on the first novel shortlist in the Costa book awards. Diary of a Somebody tells of a 45-year-old divorcee leading a “quiet half-life”, who after being “decruited” from his job, decides to write a poem a day. Meanwhile, in his monthly poetry circle, Brian falls for fellow poet Liz and is then suspected of bumping off bumptious fellow poet, Tony Salt, a regular on Radio 4 before his demise.

Brian Bilston has been posting poems on Twitter for a number of years. In 2016 he told Write Out Loud in an interview that he tried to write something new each day. He also said: “The name ‘Brian Bilston’ was one I used to use when writing light-hearted football reports for a works team I once played for. It seemed the kind of name a football journalist might have. He even had a fictional newspaper, the Dudley Echo. I just adopted that name when I joined Twitter and I’ve been stuck with it since. But I like it. It gives me someone to hide behind.”

◄ George the Poet: 'Why I turned down an MBE'

Popping up at Euston: a flashback to Write Out Loud poetry-art collaboration at Stockport ►