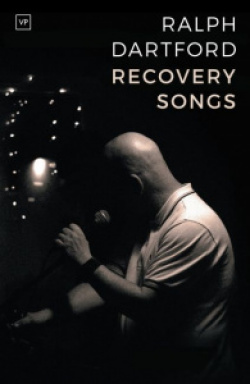 The cover of this confessional poetry collection has the poet, head bowed, holding a mic. Exposed. Recovery Songs by Ralph Dartford is not an easy read; it is not intended to be.

In an afterword to the poems the poet describes a difficult childhood in Basildon, Essex, beset by illness and bullying, and an isolated adolescence. When he left school he chose to work in the arts. “It seemed a place of safety for me; a world that was flamboyant and accepting of all my personal deficiencies,” Dartford says. “But one thing that the arts has in abundance, more than any other career choice, is the relentless pursuit of ego and triumph. My lack of self-esteem was ripened in chasing this unreachable rainbow and it became my downfall.”

Escaping from Basildon he eventually headed north, and sometimes felt an outsider there. To try and keep up “with the other so-called high flyers” he started drinking excessively and taking drugs, and ended up with a nervous breakdown and in a drug and alcohol rehab unit. He wasn’t able to cure himself easily, or quickly. The poetry “represents a snapshot of a life derailed by choices and circumstance”.

It would be wrong to suggest that the poems of Recovery Songs are all about addiction and self-loathing, although some certainly are. ‘Addict’ reads like a group-therapy statement:

I am crack pipe

… And to think I was

Once just a bloke.

Who is now broken.

Who is now broke.

‘Blackbirds’ is a subtler poem of self-hatred, while ‘This Beeston Morning’, with magpies providing the symbolism this time, is lyrical and carries hope:

I’ve slept in these rooms.

Their smoke, their foil.

A sun breaking through.

One such moment of joy is recalled in an epic poem over 10 pages, ‘We Will Be Men’, in which Dartford documents a rite of passage in which he arrives home after a day of adventures with his teenage mates, and finally talks back to his bullying dad in the same cruel language that his father employed when he was younger.

Although Dartford is by no means a nature poet, as well as the aforementioned blackbirds and magpies, a red kite hovers over a Yorkshire city in a poem that is both lyrical and realistic:

Eyes beaded as the

When Dartford arrives in the north he is sometimes conscious of his position as an outsider. ‘The Commer Inner’ attempts to convey such feelings, but I find that another poem, ‘North’, is more effective in this regard:

they said. He were really

not up to much.

Aye. We knew summat were

right wrong with him.

He were delicate to the touch.’

Whatever they think of him, he is aware of the plight of the land he now lives in:

the credit peddlers, the dreams of children.

And if Christ is the redeemer, then look down

and hang a woman’s deeds. The one

who groomed this South Yorkshire town from

pride to prejudice, from hope to heroin.

Contained in these few lines are references to pit closures, child abuse by grooming gangs, and Brexit, with one politician blamed for it all.

Despite his personal battles, Ralph Dartford has already enjoyed successful years as founder of the spoken word collective known as A Firm of Poets, which gained some renown on the poetry scene while at the same time offering a way in for youngsters. And now he has salvaged a significant collection from his struggle against addiction. It took bravery, honesty and self-awareness, as well as poetic skill to complete this book. I wish him well on his road to redemption.

Thank you Kieth. That’s very kind of you to say. I’m currently working on its sequel.

You can get the book from all the usual outlets. Waterstones, Amazon etc.

You can also get a signed copy from me here.

Free postage for WOL members too.

This book has been placed on my priority list of purchases for Christmas. I have read a number of your poems on WOL and am able to relate to your formative years as they, in many respects, replicate my own. Keep writing Ralph as your personality and courage shine through. Your memory, keen observation skills produce very readable poetry.
Best Wishes
Keith Jeffries