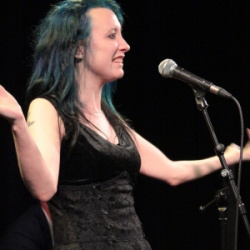 It must be made clear at the outset that A Firm of Poets are a collective of northern-based, er, poets. It’s just that whenever I’ve heard their monicker I’ve always found myself thinking of the kind of 1990s Brit crime film that made footballer Vinnie Jones a sort of film star. Yes, I know that’s a bit weird. And it was partly to get this image out of my head that I went along to see The Firm at the Bloomsbury Theatre Studio, in the middle of their 20-date People’s Republic of Poetry tour.

There are two aspects to the show.  In the main section the Firm, augmented in London by guest poets Julia Bird and the towering Luke Wright, perform a series of quickfire poems, the subject matter prompted each time by the previous poet. You have to think on your feet. There is a similar regular event elsewhere in London, at the Troubadour, but more poets are involved with the Firm’s show, and it is performed either side of the interval. Hard work.

Three signed-up members of the Firm were present at Bloomsbury – Ossett’s Ralph Dartford, referred to as the “king” of the Firm by fellow collective member, Wakefield’s Matt Abbott, plus Genevieve Walsh, pictured, from Halifax, which she said was like the cult TV show The Prisoner – “you don’t understand what’s happening there a lot of the time”. Other Firm members who often appear with them but who were not present on this occasion are John Darwin and Matthew Hedley Stoppard.

An early theme of breakfast had Julia Bird imagining consuming a full English from the body of a naked waitress – “diner, a reminder, do not overfill your plate”- and Matt Abbott telling of a late-night pie shop in Wakefield, that has bouncers on the stairs, and may find you “at 4am with gravy on your chin”. To those that may mock, his retort is this: “If you’re feeling cultural, why not catch the train to Leeds?” I want the address of this pie shop – I feel a pilgrimage coming on.

Somehow or other we found ourselves in London, with Ralph Dartford’s ‘Waterloo’ opening with the lines of the Ray Davies song, which tells of Terry and Julie meeting at the station every Friday night. He returned to this theme later in the evening, evoking Terry and Julie much later in life.

The theme of railway commuting brought Luke Wright to the mic, with his poem about his dad’s three-hour round trip into town - “Some days you looked as though you’d walked those tracks,” and shortly afterwards a hilarious  “oulipo” poem using only the o vowel about “Ron’s Knock-Off Shop”, and the reaction of some London toffs oop north: “Poor old Bolton. Soz.” The theme of deprivation was continued by Genevieve Walsh, with her “love poem to the great unwashed” - ‘Sometimes You Fall Off Chairs.’

After the break Matt Abbott, a confident and funny poet and compere, introduced the other section of the show, the People’s Republic of Poetry bit. The Firm invites wannabe performance poets to join them in a workshop on the afternoon of their show, wherever they happen to be – Doncaster, Goole, Pontefract, Brighton or London. After helping them to polish their performance skills, including mic technique, they are invited to read a poem each on stage – and to submit to a People’s Republic of Poetry anthology, with the chance of being published alongside big-name poets. Six hopefuls -  Nicholas Audsley, Becci Louise, Ali Rawlings, Mark Coverdale, Aniruddha Mukerji, and Dawn Lennon - took their chance on Wednesday night in Bloomsbury, with themes that ranged from coming out, and a relative’s death, to memories of nights at the Roxy, and deep anger about colonialism and slavery.

The theme of the People’s Republic of Poetry enabled Luke Wright – it’s at smaller venues that you realise how tall he is -  to launch forth on an extended riff about royalty, and why he turned down his invitation to attend the Palace reception for poets a couple of years ago. His impassioned performance, making full use of the space, ended when he went on one knee to seek a “knighthood” from Ralph Dartford during his poem ‘Have a Gong!’.

“The People’s Republic of Poetry … that’s why I signed up,” he said. “It’s not just marketing to me … have you noticed how lollipop men and ladies always only get MBEs?

There were many high points. I should certainly include Matt Abbott recounting how his “pro-Jeremy Corbyn” poem received a hero’s reception in Barnsley, and “dead silence” in Harrogate; Julia Bird’s ‘The Preservation of Flowers’; and Luke Wright performing his showstopping ‘Essex Lion’ poem, in two parts, about those who need to believe in something, anything.

In addition to their current tour, A Firm of Poets have been popping up at a number of festivals, and performed to great acclaim at Latitude earlier this year. Ralph Dartford gave Write Out Loud a very generous mention at the start of the second half of the show. His arts career has included a spell as manager at the Bloomsbury theatre, he told the audience. And we at Write Out Loud remember him as a Yorkshire-based relationship manager with Arts Council England, and performing at a Write Out Loud poetry-jazz event that is still recalled fondly by many of those who were there.

At the end of the first half Ralph addressed the audience, and asked if there were any there who were newcomers to performance poetry: “How has it gone? Pretty good? No one’s been hurt, have they?” And that was true. I can faithfully report that A Firm of Poets certainly did the business - and that there were no casualties.

Their next tour dates are at Bury (30 October) and at Helmsley (31 October).

Many thanks for the directions, William!

The pie shop is on Cheapside, near the junction with Westgate. It is a short walk from Wakefield Westgate station.