The carriage in the forest 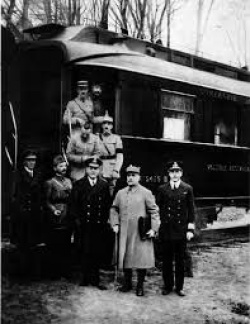 After three days of arguing the armistice was signed

in the French general’s private train

at a siding in the forest of Compiegne.

The Kaiser left for exile in Holland.

The military, unwilling to admit defeat,

No one told the people how bad things were.

after being gassed the month before,

a misfit whose life only made sense

in the trenches, blamed surrender

on socialists and revolutionaries,

hadn’t really lost at all.

Comrades had regarded him as weird,

sat in a corner of the mess on his own.

Didn’t care about leave or women,

received no letters or parcels from home.

The railway carriage, displayed in Paris,

returned to the forest where it remained.

When world war resumed, with swagger

and swastikas the corporal received France’s

surrender among the trees, in the same

compartment; the misfit’s moment of revenge.

As well as can be expected, considering the election result, Jeff! Thanks for your positive and defiant optimism. We will need plenty of that in the months and years ahead.

Good stuff Greg, very interesting thanks for posting. Glad you enjoyed Rise Again, yes slow rebuilding process starting on our own doorsteps, hope you're good, all the best for 2020, cheers Jeff 😃

Ah, Martin, if only they had admitted him to art school in Vienna ... thanks for your comment. Thanks to those who've liked this, too.