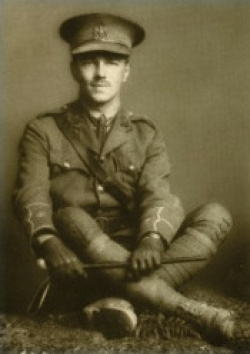 After Craiglockhart he returned to the front line.

In October the officer wrote home:

‘My senses are charred. I don’t take

the cigarette out of my mouth

when I write Deceased over their letters.’

After four years of war that transformed his verse

the Allies were making swift advances

but talk of peace was premature. He wrote

to Sassoon: ‘The new soldiers cheer

when they hear these rumours, but the old ones

bite their pipes, or go on cleaning their rifles.’

In early November the officer was doing his job,

urging his men to cross a canal on rafts after

engineers had been cut down by machine guns.

At the water’s edge he was hit and killed.

On November 11th, just before eleven, a Canadian

was one of the last to die on the Western Front.

On that same day the parents of Wilfred Owen

could hear the bells of Shrewsbury,

an armistice anthem as their telegram arrived.

The carriage in the forest ►