Competition closes in 20 days, 23 hours. Get details and Enter.

Five of Wands – Unfulfilled struggle – A battle of Wills, a challenge, a conflicted competition 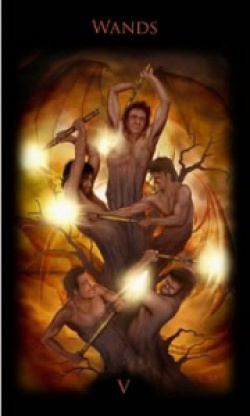 Five of Wands – Unfulfilled struggle – A battle of Wills, a challenge, a conflicted competition

Interpretation: The five of wands indicates a conflicting battle of will. You will notice on the card there are five boys fighting in a mock like way, tiptoeing around each other, this indicates an indecisive struggle and an internal strife. You will also notice that the wands make an off centred pentacle and this could indicate a more spiritual conflict. Perhaps you are having a hard time with your chosen faith and having to battle a lot of people’s opinion and criticism about it and also about your new enlightened way of thinking. This could also be criticism and conflict within yourself, having to now deal with what is traditional values and teachings you have come to know for something more alternative and different. It’s like your heart is telling you one thing and your mind is saying another and it may seem that you are battling within yourself to come to terms with something important to you. This could also be weighing heavily on your heart and you may be feeling unsatisfied that you are not reaching some form of peace of mind with all this new and overwhelming experiences.

This card could also indicate that the seeker may be experiencing rivalry and competition and there may be complications in their plans with others who may be after the same things as they are. Be it business deal or even a potential relationship, there seems to be quite a bit of conflicting interest going on. However this could be a healthy form of competition that will keep you on your toes and this card could warn the seeker against being too passive in their approach and suggests the seeker take firm action to overcome this challenge.

Reversed: The reversed five of wands could indicate one of two things and the seeker will need to examine both options to get to the true meaning of this card. In a positive aspect, it could indicate that the period of struggle is over and that you can now move forwards, having overcome the obstacles that was in the way and the seeker no longer has to deal with the unfair opinions of themselves and of others, perhaps the conflict within yourself has also died down a little and you seem to be handling things a little better.

Or in a negative aspect, it could indicate that the seeker is having to face unhealthy competition and challenges. Perhaps there is a lot of petty arguments, unfair conflict and nastiness going on and the constant challenges of the seekers life is wearing them down. Perhaps you do not have control of the situation and everyone around you is giving you way too much grief about something in your life or your way of thinking. Things may be getting out of hand and this card warns the seeker to take more charge of themselves and the

Six of Wands – Triumph – Victory, success, the realization of a goal ►