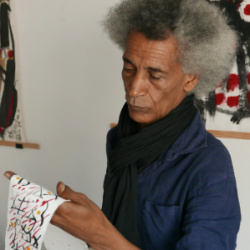 Two years ago the National Poetry Library launched an ambitious, global project to track down poetry written in endangered languages, to collect and preserve them. On Saturday the library’s Chris McCabe introduced at the Purcell Room at London’s Southbank Centre an anthology of poetry garnered from all over the world, from Alaska to the Pacific islands, from Equatorial Guinea to the indigenous people of north Pakistan, and from Cornish and Breton to western Armenian.

Poets at the well-attended launch – one of the Southbank’s Poetry International events - included Assyrian-Iraqi  Nineb Lamassu; Navajo Nation poet laureate Laura Tohe; Mahmoudan Hawad, pictured, from the Tuareg nomadic tradition;  Maori poet Vaughan Rapatahan; and Valzhyna Mort, from Belarus. Poets James Byrne and Shehzar Doja presented poems they had garnered from Rohingya refugees in Bangladesh; and poet and translator Stephen Watts appeared on stage with both Lamassu and Hawad to present English translations of their work.

Introducing the poets and the anthology, McCabe said: “In the world we live in, language is highly political. Choosing to write in a particular language can be a dangerous act.” Nineb Lamassu, who now works in the UK, said: “My language [Assyrian] was prohibited for many years in Turkey, Syria, Iran … We as poets need to be the voice for the voiceless.”

Poet, editor and translator James Byrne recently co-edited with Shehzar Doja the first anthology of Rohingya poetry after travelling to the refugee camps in Bangladesh and setting up creative writing workshops there: “The poets we worked with talked of genocide, rape and torture.” Shehzar Doja added: “Genocide also destroys culture and communal history … on the border [with Myanmar] I could see the charred outlines of a village. That was absolutely harrowing.” Byrne said that all the poets in the anthology were published under pseudonyms.

Navajo poet Laura Tohe’s ‘Map Songs of the Sandhill Cranes’ explores how the songs and myths of a place can become the cultural map for a people, and talks about a number of worlds, including the ‘Glittering World’. A second poem linked the genocidal massacres of Native Americans with today’s high school shootings at places like Sandy Hook and Columbine, in a country “built on blood, and guns, and glory”.

Vaughan Rapatahana is published both in Maori and in English, and his poem ‘britain in the south seas’ rejects the ideal of the colonialists: of establishing a ‘mirror’ country:

in this skinny country

are still the first people

The English version of the poem includes the Maori word whakapohane, which means turning your back and lifting your clothing to reveal a bare backside. As Rapatahana explained it in the Purcell Room: “Showing your ass to the colonialists … showing that you’re pissed off at the way you’ve been treated.”

Valzhyna Mort was born in Minsk, Belarus, and talked of her country’s “violent” 20th century history, explaining that most of its mass burial sites from the second world war were recognised, but those from the Soviet era were not. There is a special date in Belarus – the last day of October, 1937 – that is known as the “night of the murdered poets”, she said. Her anthology poem, ‘Berlarusian I’, includes these lines:

When we discovered that we ourselves were the language

and our tongues were removed, we started talking with our eyes.

When our eyes were poked out, we talked with our hands.,

When our hands were cut off, we conversed with our toes.

When we were shot in the legs, we nodded our heads for yes

and shook our heads for no.

There were lighter moments at the Southbank, in the midst of so much oppression and horror. Hawad is an Amajagh or  Tuareg poet and painter of the Sahara desert, who now lives in France. He writes all his manuscripts in his Tamajaght language; its alphabet is one of the oldest scripts in the world. His literary and graphic work is said to reflect his philosophy of space and ‘wandering’, exploring a new form of nomadism. Hawad’s recital was haunting, passionate and hypnotic. He used his voice as a musical instrument at times, moaning or groaning, sometimes interrupting if not heckling his patient and unfazed translator Stephen Watts. At the end of his set he was reluctant to leave the stage, keen to expound further, in French, about his poetic philosophy. And he did, for some time. The audience loved it for the main part, but eventually one member shouted back – in French – that we needed to hear the other poets. Hawad was persuaded to take his seat on the stage, but was restless thereafter, fidgeting with his bag and raincoat, as if keen to continue his wanderings.

Introducing the evening, National Poetry Librarian Chris McCabe said it was an “important and special moment” for the library. In his foreword to the anthology he talks of tracking down possibly the last living exponent of a patois language on the island of Macau, near Hong Kong. Closer to home, the anthology includes examples of Cornish, Irish Gaelic, Manx, Scots, Scottish Gaelic, Welsh, and Shetlandic poetry. Many of the texts featured were submitted by members of the public, and submissions are still encouraged for new poems to be sent to the National Poetry Library.

The launch of the Poems from the Edge of Extinction anthology took place on a day when marchers who had been calling for a second referendum on Britain’s looming exit from the European Union were milling about on the Southbank after the end of the protest. It was a sobering reflection of troubles elsewhere in the world. The anthology represents a remarkable achievement for Chris McCabe and the National Poetry Library, and deserves great applause. I look forward to dipping into it reguarly and learning so much more.

Poems from the Edge of Extinction, edited by Chris McCabe, Chambers, £16.99

Poet laureate receives his sherry - and remembers the Marsden cuckoo ►