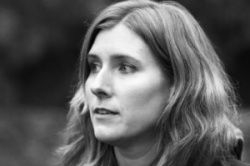 Fiona Benson has won the £10,000 Forward prize for her collection Vertigo & Ghost, it was announced on Sunday night at the Royal Festival Hall on London’s Southbank. After receiving the prize, she said: “Thank you so much! We were all asked to prepare something, which of course I didn’t!” Benson, who was born in Wiltshire and lives in Devon, has said that the terrifying sequence of Zeus poems that form the first half of her collection emerged from “a long buried experience, and then a sudden pouring-in of words, that I can only explain as coming out of the woods”. The sequence makes palpable the sexualised violence latent in Greek mythology, with Zeus as abuser-in-chief, abetted and feared. It is followed by an exploration of the complex and ambivalent terrain of early motherhood. The last words of ‘Eurofighter Typhoon’, the final poem in the collection, are “Mary, Mother of God, have mercy, mercy on us all.”

Vertigo & Ghost has also been shortlisted for the TS Eliot prize, to be awarded in January 2020. Shahidha Bari, chair of the Forward prize judges, described it as “a work of unfaltering determination and self-inspection. It is an exhilarating collection that pulses with fury, fear and defiance – and enduring hope too". The judges included poets Tara Bergin, Andrew McMillan, and Carol Rumens, plus Jamie Andrews, head of culture and learning at the British Library. They also named Stephen Sexton as winner of the £5,000 Felix Dennis prize for best first collection, and Parwana Fayyaz winner of the best single poem prize worth £1,000.

Belfast-born Stephen Sexton’s If All the World and Love Were Young, is influenced by the Nintendo computer game Super Mario of his youth, and is a pastoral elegy for the poet’s mother. He began work on the sequence in 2015, and in his own words “soon realised that this particular game was so much a part of my childhood that I couldn’t write about it without thinking of my childhood, and I couldn’t write about my childhood without thinking of grief”. He won the National Poetry Competition in 2017, and teaches at the Seamus Heaney Centre for Poetry in Belfast.

Parwana Fayyaz was born in Kabul, raised in Pakistan, and is currently working towards a PhD on the medieval Persian poet Jami at Trinity College, Cambridge. ‘Forty Names’, which first appeared in the magazine PN Review, draws inspiration from medieval Persian traditions; Fayyaz heard the story from her parents when she was a child. “It is about a mountain called kohi chehal dokhtaran, the forty girls’ mountain. My poem tries to re-narrate the story by giving the forty women their names, a lamp and their colourful scarves.” She intends to stay in academia to pursue her studies of Persian Sufi poetry, and work towards her first collection.

◄ Notes from a small island (1)