by Lucas B. Foley 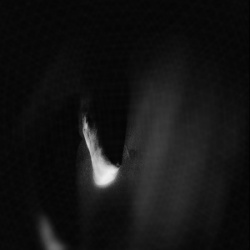 of reality, imagination, experience, & being

by presenting arrangements so engaging, uncannily

that the foamsplash suddenness of its crashing

across a previously unnoticed beach of the soul

halts, a moment at least, the crab mind’s clacky

from the ultimately undefinable unknowability of

when the wave’s final fizziness surrenders to sand

& its borrowed water slides back to the unconscious

clinging with pristine crystallinity to what once

flowed & shimmered below, & shall again, surely,

upon not only the rivery world but also the infinite

inner landscape, which somehow both consists of,

& is rendered by, spirits singing themselves into being

& signaling kindredly peculiar mysteries to one

another through mediums shared & sustaining,

not unlike whales scattered in the twilight