Competition closes in 20 days, 23 hours. Get details and Enter. 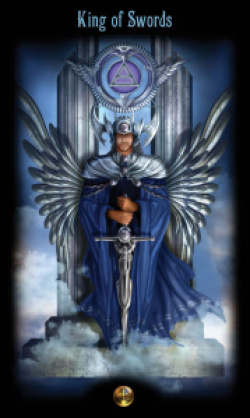 Interpretation: The king of swords represent a strong Willed man with a perceptive intelligence. He is the supreme ruler of his domain and he is extremely steadfast in his ways. He rules with a firm and dominative hand and stand supplanted in beliefs. He rules with his head and not his heart which often leads to having to make the hard decisions that no one else can. He is in complete control of his emotions and his intelligence supersedes all else. The king make his decision with a clear insight and promises to be fair and just. The king of swords shows a superior advanced knowledge of righteous behaviour and he stands strong to defend the honour of who he truly is for his name sake.

This king of swords may indicate that the seeker will receive some sound business or legal advice and that whatever the outcome is they will remain on top of the situation. This card may also indicate that the seeker could be acting in an overly cool and intellectual manner and they need to consider whether or not they are out of touch with their feeling. Perhaps you need to find some balance between your headspace and your heart and try to consider being more empathic to the situation at hand.

Reversed: The reversed king of swords indicate that his may be a time of suffering and injustice deception or intimidation. There is too much pig head untrustworthy hard-hearted cruelty and crafty malice by either the seeker or someone known to the seeker. If you are awaiting a decision or perhaps in need of making a decision the reversed king warns that this may not be fair or a just cause. It con also indicate that you may be exploiting others through your superior intellect or sarcasm. Be warned that this could be a very dangerous and wrathful intention and you will suffer the consequences of your actions.

Hi Raven. It's good to see you posting here again. There is so much wisdom embodied in the tarot. It is a brave soul who would draw from the well. Archetypes are important signifiers of ancient wisdom and to seek is to find. Us poets try to cover many aspects of life, and humility should be a prerequisite.

Uniquely interesting. If there was a President card it would be relevant today!