Competition closes in 25 days, 15 hours. Get details and Enter.

Leading poets back protests over management of Scottish Poetry Library 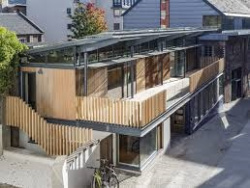 A number of leading poets have severed their links with the Scottish Poetry Library in protest at the way it is being run, and former staff members issued a statement of support calling for action to tackle a "toxic working environment."

The library’s four honorary presidents - former Scots makar Liz Lochhead, Douglas Dunn, Michael Longley and Aonghas MacNeacail - resigned in a joint letter saying they were “deeply unhappy” with its current management and governance. Since then the former poet laureate Carol Ann Duffy, Don Paterson, and Ron Butlin, the former Edinburgh makar, have been among 16 “friends” of the library to issue a statement in support of the former presidents.

Thirteen members of staff are said to have left since the appointment of current director Asif Khan three years ago. In their joint statement, the former staff members said they had felt "obliged to speak out to preserve the SPL’s reputation and future”.

Two years ago more than 20 of Scotland's leading poets raised concerns about the library's hierarchy and referred to it as a "scene of unhappiness”. Jackie Kay, the current Scots makar, and Carol Ann Duffy were among those to sign a letter expressing a “real sense of concern” about the direction and management of the library, which was set up in 1984 and is situated near the Scottish Parliament in Edinburgh.

Members of the library’s board include poets Stuart Paterson and Nuala Watt. The letter by the four presidents that have resigned, reported in The Scotsman, said that they had taken their decision “because we are deeply unhappy with the current management and governance of the library”.

The statement from the former members of staff said: "The library is adrift. It has little effective or inspirational leadership, and it has lost a wealth of staff experience and expertise which left newly joined and capable staff without adequate continuity or handover, often in constricted versions of the original role.

“We join other sector voices to protest at the current management and governance of the library, in the hope that appropriate working conditions are established for current and future staff to help the SPL implement its mission for Scottish poetry."

The SPL board said a statement: “This is a disappointment but it’s their decision. We’ve worked hard over the last year to bring the library’s governance into the 21st century and are certain that this work will strengthen the library for years to come.” On its website the SPL says it is looking for new board members.

The SPL’s director, Asif Khan, Mr Khan said: “I have continued confidence, and indeed admiration, of the good work, dedication, effort and commitment of the board, staff and volunteers to modernise and diversify the governance and services of the library.”