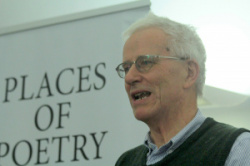 A renga is a term for a series of haiku linked to a theme – “a necklace of poems”, poet Sara-Jane Arbury called them. What a lovely idea. People in Exeter were invited to write haiku while visiting a number of interesting and historic locations in the city during recent Heritage Open Days – and Sara-Jane, pictured below, right, was charged with putting them together as a renga. She used 60 of the 130-plus contributed by members of the public over the series of open days – and as she recalled, when asked to write a haiku inspired by where they were, “no one said No.” 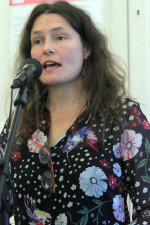 This was the latest and last of the projects organised over the length and breadth of England and Wales by Places of Poetry over the last few months. They have included poet Will Harris working at Avebury with asylum seekers from the Harbour Project, Swindon; Shetland-based poet Jen Hadfield working with local schools at Ely Cathedral using poetry to explore the history of the cathedral and its founder Etheldreda; Gillian Clarke doing the same sort of thing at Caernarfon castle; Neil Rollinson running workshops for groups within the community at the Roman Baths in Bath. Other projects have been located at the Big Pit National Coal Musuem in Pontypool, the river Severn, the Wordsworth Trust at Grasmere in the Lake District, the Byker Community Trust in Newcastle, Dovedale in the Peak District, Housesteads Fort on Hadrian’s Wall in Northumberland, Sherwood Forest in Nottnghamshire, and the Kia Oval in London.

And all this time individuals have been doggedly pinning their own poems to the poetry map of England and Wales, so much so that there are well over 5,000  poems up there, with just a few weeks to go before the deadline of 31 October. It was never intended to include Scotland, but nevetheless a host of poems have found thier way north of the border, too. 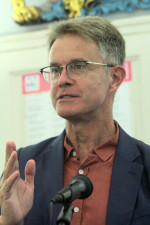 In a guest blog written for the Ordnance Survey, one of the many organisations supporting the Places of Poetry project, Exeter University professor Andrew McRae, pictured right, who has led the project with poet Paul Farley, said: “We have had poems pinned to fields and villages, cathedrals and football grounds, ports and train stations, street corners and parks. There is a roughly even mix between poems about rural and urban landscapes, while many writers have focused on the coast, even thinking about events that have happened off-shore such as shipwrecks. Although many arts projects are criticised for being London-centric, Places of Poetry poems are widely scattered. Some surprising cities and towns, such as Portsmouth and Stoke-on-Trent, emerge as hives of poetic activity.”

McRae expanded on this at the launch of the Exeter Renga at the Custom House at Exeter’s historic Quay area on National Poetry Day, saying: “Portsmouth emerged as one of the most popular places to post poetry. Who would have predicted that?” He added that Cornwall had emerged as the most popular place for poems, based on population density. The number of poems posted had also been boosted after the project featured on BBC’s Countryfile programme.

Locations featured in the Exeter Renga were St Nicholas Priory, a number of churches, the city’s Underground Passages, the Royal Albert Memorial museum, pictured right, and the cinema museum, a floral art lamp collection, Exeter’s Cathedral, below left, and Guildhall, below right, and the Custom House, pictured left. Introducing them, Sara-Jane Arbury said she had been born in Exeter, grew up in Sidmouth, and now lived in Ledbury in Herefordshire.

One of those reading a poem at the launch was Stephen Poole, whose poem ‘How time stole my Paignton home?’ can be found on the poetry map in south Devon, and begins: “I feel like a stranger, / Yet this should never be, / For the streets of my childhood / Now seem alien to me.” Another, Simon Timms, pictured top, read his haiku, the first poetry he said he had written in 45 years. The final line of his haiku was: "Love spells happiness." Young Sebastian Pilling also read his haiku about the historic and fascinating Roman wall, while

poet John Wedgwood Clarke, who used to publish poems about Scarborough and York but has now re-located to the south-west, popped in to deliver a poem as well.

I, too had my moment, reading a poem ‘The Old Branch Line’ about a long-gone railway line in east Devon that is also pinned to the poetry map, and was originally posted on Write Out Loud many moons ago. I say "reading a poem" - in truth, I have pinned a current total of 35 poems to the map since it was launched. Andrew McRae eased any embarrassment at my addiction by saying there were at least one or two poets out there who have posted more.

The Places of Poetry project was originally due to end at the beginning of this month, but has been extended until 31 October, which may still turn out to be a historic national date. It’s not far-fetched to suggest that the Places of Poetry project, with its openness and eagerness to find room for all kinds of poetry, has already notched its own place in history – certainly poetry history. It has provided a refreshing and dare I say unifying antidote to the pervasive national mood right now.

So you haven’t yet placed any poems on the poetry map, don’t delay! From the beginning of November it will be there just to look at, not to add to. Will Cornwall or Portsmouth be toppled from their top spots?

Further good news about this wonderful project ... an anthology of around 200 poems is promised. https://www.placesofpoetry.org.uk/The-Places-of-Poetry-Anthology/Blog/

Only the one, Ray? You must have loads more. Get pinning before the end of the world - I mean, 31 October! PS Glad you enjoyed the read. I had a nice time exploring Exeter and taking those pictures

A heartening and epic report with your heart well and truly pinned to it Greg.. my poem was London centric and equally addicted. A celebration on the creative level makes a good antedote to the festerings of Brexit.