The Plains of Babylon 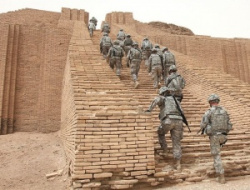 They gather on the plains of Babylon.

“Let's shake it down and cross the Rubicon.”

“A stairway up to heaven is our need.”

The plots they thicken, artful plans are honed.

They build their zigurrat to breach the blue.

In shifting shapes to overthrow the throne.

''Our destiny is to become divine.”

From high above the plains of Babylon

The angels see the tumults and misdeeds.

The rebel throngs sing out their rebel songs.

The angel hosts mount on their fiery steeds.

“The wicked we will scatter and pursue.”

“As chaff in winnowing, they will be blown,”

“Who sacrifice at that unholy shrine.”

Of rebels and angels we tell, we tell.

There was a scattering at Babylon.

We gather together, With who? With who?

Thanks Adam - I had a job remembering what the form was as I wrote it in June I think. There are a few different types of Ode but it's a fexible form. I was mainly attracted by the strophe - antistrophe - epode theatrical structure of the original greek type.
https://en.wikipedia.org/wiki/Ode
When I did my fifty forms I used the list given on the Shadowpoetry site.
Go well
><>

This is great work in my opinion. I live the epic theme, the cadence, everything. I will enjoy rereading many times. I really don't know my poetry forms. Is this a particular form I could look up the rules of as I would like to try to write similarly. Thanks.
A.