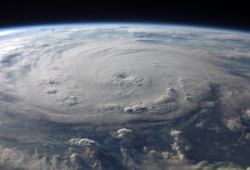 Sandy was a hurricane that hit the east coast with a vengeance on Oct 22, 2012. Sandy, the perfect storm by some and labeled a ‘’ by others. But everyone would admit it she was a freak of nature.

Let me tell you a tale

A story that is true.

A hurricane with many faces

All the changes it went through.

No surprises needed to ,

This and nothing more.

But Sandy held her true face

Right up to the very end.

She was a freak of Nature

Mother Nature had other plans.

Then came up toward the Eastern Shore.

While Sandy was keeping busy

But this isn't where Sandy does her best.

She'll hit the East Coast at the Jersey shore.

The largest hurricane of them all.

She'll touch the biggest cities along the coast

Leaving devastation with much to fall.

When Sandy made land fall.

But then Mother Nature added a twist.

The Full Moon was witness to it all.

NYC flooding was a real problem.

Everywhere the wind took its toll.

Her size angry and mean.

She had much character

Sandy was a child of Mother Nature.

She is the one that surprised us

With a freakish storm that challenges us all.

When Mother Nature wanted to play.

Was the real joke of the day.

All the forces she knew.

Changing the course of history.

Did You Know I Have Cancer ►

Hi Belinda,
I remember Hurricane Sandy well. ( And Irene before that, which was worse here.) The storm was intense. I remember it being of the lowest millibar pressure ever recorded...I felt it, made me sick. The animals were all freaking out too. I live in MA so did not get the brunt of it. But oh my...so many others nearby did. I am sorry for the destruction of storms...but I love weather and the science behind it. Great job on this...just in time for Hurricane Season on the East Coast of the US

A perfect intertwining of rhythm and rhyme Belinda. I have now met Sandy.......