Bulls Into the Sea. Animal Abuse in Spain 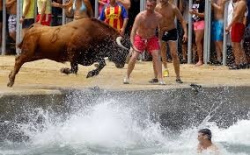 Bulls Into the Sea. Animal Abuse in Spain

Bous a la Mar's on the go again

In Spain, for it's people and bulls

After running the main street of Denia

They jump in the sea, pleasing all

To ban such bull sports across Spain

Claiming it distresses the animals

◄ Cricket World Cup. England vs Australia. Sunday England vs NZ. And the Winner Is........

Maybe we've got in wrong in this case? Mr Bull seems to be quite enjoying himself.

A nice dive in the briny to finish it off?..yay!..

Sorry for mayhem I caused in your china shop from by bit of fun....

(the bullfight is a completely different story....)

mans inhumanity not only to his own kind but also almost every one of OUR wildlife species never ceases to sicken me. Well written D.M

This poem and its accompanying video clip will provoke quite a response from the readers. My partner is Spanish and from Bilbao. He abhors all such activites and wishes to see Spain bring a halt to what is barbarity in the extreme. The bulls are taunted. In the late 1960´s I was in Spain and went to see a bullfight. I came away sickened vowing never again to witness such gratuitous violence to animals.

Not that I want to promote ANY violence, but I do enjoy when the human runners get gored...serves them right!