Genocide in the Christian East

Blessed are the icons of the Christian East

Fallen into the hands of Whabbi murderers

These who deny the sanctity and purity

Of those who resisted Muslim suzerainty despite

The heavy penalties: their children stolen,

But they're still here

These Orthodox Christians who stuck to their religion

Through thick and thin and never gave in:

Survivors of the Ottoman genocides of Christians.

And the 'Christian' west confesses to nothing,

Stupid, consumerist, empty of belief, believing nothing at all,

As the sun sets and meaning leaches away

Into the mindless consumption of the west's 'Christian'

Science   falls into its own black hole,

The dark  Mathematics of infinity fit the bill

In this corrected world of forms with minus meaning

No assumptions challenged, no seemings believed,

No ascensions made and the bravery of the Christian east

Nullified, spat at, denied; for in the west:

The living deny their debt to the dead,

So, all that they dread will come true,

The take-over is now almost complete

Who had forgotten evil's steady reach

Look in your head,  untwist your hearts. 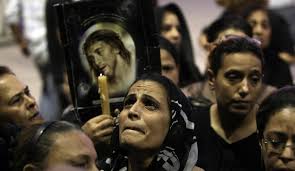