Mapping England and Wales with poetry - how you could be involved 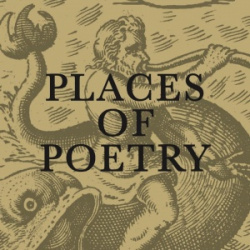 A project centred on place is inviting poets to add their poems to a new digital map of England and Wales. The organisers say Places of Poetry is open to all readers and writers, and aims to use creative writing to prompt reflection on national and cultural identities in England and Wales, celebrating the diversity, heritage and personalities of place.

The site is open for writers to pin their poems to places from 31 May to 4 October 2019. At the end of the first week the project said that 859 poems had been posted, with a total of almost 14,000 views.

Places of Poetry is led by poet Paul Farley and academic Andrew McRae. It is based at the universities of Exeter and Lancaster, and funded by the Arts and Humanities Research Council, the National Lottery Heritage Fund and Arts Council England. It is also working in partnership with the Ordnance Survey, The Poetry Society, National Poetry Day and the Betjeman Prize. The Poetry Society is currently devising a series of prompts and exercises for all levels of writer to encourage new poems of place. These will be part of specific toolkits for schools, organisations and individual writers and will be available to download for free from the Places of Poetry website.

Andrew McRae said: “We welcome writers of all ages and backgrounds. We want to gather as many perspectives on the places and histories of England and Wales.”

Poems will be moderated. McRae added: “We will review all poems, but only reject those that are manifestly unsuitable (e.g. offensive, advertising, plagiarism). We accept poems in English and Welsh, and apologise that we are unable to publish other languages because we do not have the resources to review them. While the project’s focus is the creation of new poems, we are happy for users to post their favourite existing poems (as long as they are out of copyright). Unfortunately it will not be possible to edit poems once you have pinned them to the map.”

The project has been inspired by a 17th century, 15,000-line poem - Michael Drayton’s epic of national description, Poly-Olbion (1612, 1622) - that includes a unique set of county and regional maps, by the engraver William Hole, upon which the new project is based.

Poly-Olbion only describes England and Wales. It was largely written in the years after King James VI of Scotland was installed as James I of England, proclaiming a vision of a united island kingdom. Like many of James’s subjects, however, Drayton was unconvinced, and never fulfilled his stated intention to extend his poem into the land of King James’s birth. Places of Poetry will follow Drayton’s model, and hopes to reflect in the process on the connections and tensions – then and now – between the constituent nations of the United Kingdom.

William Hole engraved 30 maps, each covering one or more counties. They are highly decorative and iconographic, as though in dialogue with Drayton’s poem, and careful and detailed in their iconography. For the new digital version, the coastline and major rivers had to be redrawn from scratch, so that they would fit over the modern Ordnance Survey map.

◄ Wenlock's bookshop and poetry hub is forced to close

Women of the north: Kate Fox to spin some yarns in Marsden ►

Thank you muchly Greg. I should of paid more attention when I did that year of welsh lessons at primary school.
So all I have to do now is write a poem. Yea!!
><>

Can anyone spell out for me -how- one actually gets to 'pin a poem' on the map?
Thanking you in advance.
><>

I can already see a couple of familiar Write Out Loud names up there ... I'm thinking Hampshire, Surrey, Goole ... You can zoom right in to your particular locality. There's room for everyone!

This could be big!